Legal Aspects of Game Suspensions due to Coronavirus

Games and sporting events are being suspended all around the world as a result of the global coronavirus pandemic. What are the legal aspects of these suspensions? 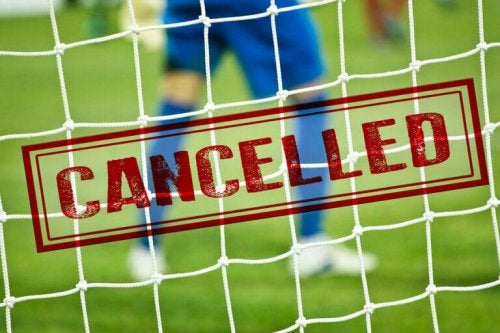 Most soccer leagues have announced several game suspensions due to the coronavirus. But, what are the legal scopes or aspects of this measure? Learn about them in the following article.

This is a matter of public health that began with playing matches behind closed doors and ended with the complete and temporary suspension of different leagues. This type of measure has, in fact, carried over into most sports.

Suspension of games due to coronavirus

Game suspensions due to coronavirus are the response to a health emergency situation. Initially, some people proposed the idea of playing games behind closed doors. This first measure even came to fruition in some leagues.

However, as the crisis advanced, the situation became much more dramatic and the complete suspension of games became necessary. Strictly speaking, said suspension doesn’t cause legal problems.

In countries such as Italy and France, it’s mandatory to remain in quarantine to try and slow the spread of the virus. In other words, it’s illegal to remain on the streets unless the person meets the requirements expressed in the exceptions.

With that being said, even though the suspension of games due to coronavirus doesn’t come with greater legal consequences, it’s also true that the economic losses will be huge. Many people are directly and indirectly affected by one of the most lucrative industries in all of Europe.

As expressed by the president of the Spanish Football Federation, Luis Rubiales, the current priority is people’s health. Therefore, they can’t anticipate or define the new competition calendar.

Likewise, there’s still no official information about the new game dates for most cases. At the moment, they’re still not considering the possibility of playing in the summer. If the situation rapidly changes, they’ll take the appropriate measures.

How has the coronavirus pandemic affected sports?

Coronavirus has affected all the corners of society. It’s a real tragedy both in terms of health and in the economic dynamic.

Sport has been one of the most affected areas by this global pandemic. This is because it constitutes one of the main economic engines. Furthermore, this situation has escalated practically around the whole world.

In the specific case of soccer, the vast majority of leagues and tournaments have been suspended or postponed. The last best-known case was the suspension of the Copa America 2020, which will take place in the same venues but in the year 2021. The same goes for the UEFA Euro 2020, it will also carry over to the year 2021.

Other sports have also been affected, and a large majority have experienced suspensions due to this global pandemic. Even Formula One suspended the Australian Grand Prix after a McLaren team member tested positive for coronavirus. Meanwhile, MotoGP competitions have also been postponed due to the same situation.

Returning to the issue of legality, suspension and postponement of games and competitions in other sports shouldn’t create problems in this regard.

The effects on global economics

Unfortunately, there will be many consequences and economic losses. The different clubs will have to rethink their economic plans in the coming months and also in the year 2021, with the aim of accelerating their recovery.

Coronavirus has put world health and the economy in jeopardy. It’s managed to affect every productive sector of society. Sport is one of the most important sectors, as it generates some of the biggest incomes and profits.

The next few months will undoubtedly be a challenge. The most important thing at the moment is prevention and managing to contain the virus. The time will eventually come for new planning and, of course, recovery in the broadest sense of the word.

Game suspensions due to coronavirus don’t have direct or general legal consequences. The biggest repercussions will happen on an economic level. Each of the clubs must make an effort to meet the commitments they made and thus avoid problems in the near future.

Historical Quotes by Famous Athletes
Many athletes have given their thoughts and advice by means of famous things that they have said. Here are some of the memorable quotes by athletes. Read more »
Link copied!
Interesting Articles
Sports
How to Develop Social Intelligence Through Sports

OTHERS
The Post-Sport Careers of Elite Athletes

From the outside, sports can seem a glamorous universe where dreams come true. However, the reality for elite athletes and…

At only 24, this Spaniard has made a place for himself in the history of motorcycling. The Catalan motorcycle road…

Sports
How Many Calories Do You Burn Riding A Bike?

We're sure a lot of people have asked themselves how many calories they burn riding a bike? After all, this…

SOCCER
When Were the Main Soccer Leagues Formed?

For the most part, the main soccer leagues have played since the beginning of the last century. They've made lots…