The Muscles You'll Work With The Goblet Squat

Whether or not you've ever heard of the goblet squat, we suggest you try it and get to know all the benefits attached to it. Check it out! 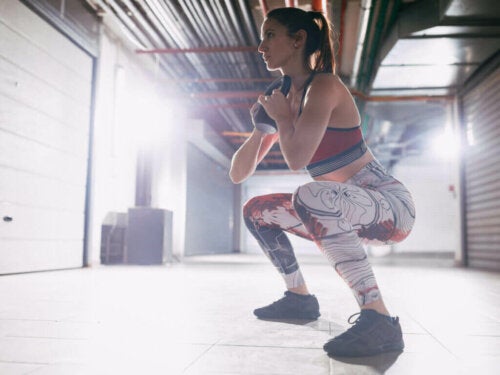 Legs are one of the most important body parts, which means you should regularly train the leg muscles with discipline and patience. To achieve great results, you can include the goblet squat in your routine. Have you ever tried it?

If you want to know what goblet squats are, what they’re for, and what muscles are involved, just keep reading. Remember that knowledge can improve your training routine.

What are goblet squats?

There are a large number of squat variations. Broadly speaking, this kind of exercise strengthens the leg area, and depending on which variation you choose to do, you’ll be exercising different sets of muscles.

For what it’s worth, the goblet squat is quite conventional with a very important variant: weight. To “create” weight, you may use a dumbbell or a kettlebell, which you should hold with your upper limbs.

This type of squat is one of the most recommended variations, not only to include in a routine to work the core but as a warm-up exercise. Of course, this will depend on your training coach and the weight of the dumbbell you’ll be using.

What muscles does the goblet squat work?

Since the goblet squat focuses on the lower body, it mainly works leg muscles. However, within these, other muscles are also used while performing the squat. The most relevant muscles that the goblet squat works are the glutes, the quadriceps femoris, the adductors, and the hamstrings.

In addition, there’s a number of upper-body muscles involved in the goblet squat thanks to the dumbbell or kettlebell used to increase the complexity of the exercise.

In this case, the arm muscles perform isometric exercises. This type of effort occurs when muscles resist an external force without moving in any way.

The above-mentioned muscles are the main executors of the goblet squat, no matter their function. However, there are other important muscle groups involved in this exercise that make this type of squat a very complete exercise: these are the ones that make up the core, abdominal, lumbar, and dorsal areas. The glutes are also part of this (but we’ve already mentioned them), as well as the gastrocnemius muscle and the foot flexors.

Why you should specifically do the goblet squat

The fact that you get to work many muscles with this exercise is a good enough reason to do it regularly. Apart from that, goblet squats are ideal for improving posture. Working with dumbbells forces the back to remain erect, which is an important position to maintain in order to properly do a squat. It can also be the first step in improving your over-all squat technique and trying more squat variations.

Goblet squats and back problems

The main problem with executing a conventional squat is the technique, which is where goblet squats come in handy. As we mentioned before, this is a good enough reason to do them.

On the other hand, they’re usually appropriate for people with back problems, who suffer from the curvature when performing a conventional squat. Lifting an eight-pound dumbbell with your arms helps to solve this particular issue.

How to Do Squatting Properly
Squatting might look easy when you see someone who knows how to do it properly. Once you've mastered it, you'll be able to do it without thinking about it. Read more »
Link copied!
Interesting Articles
Bodybuilding
Physical Training For Contact Sports

Physical training in contact sports plays a key part in developing these disciplines. If you don't prepare sufficiently, the results…

Routines and exercises
Discover the Different Types of Push-Ups

Push-ups are an essential part of any workout routine due to their great benefits. They’re also very easy to do.…

Pain and muscle soreness may frequently be an issue for you, which can limit your daily movements. Any part of the body can be affected and may need attention and…

Diet and nutrition
The Sirtfood Diet: What Does it Consist of?

The sirtfood diet is an eating plan that several famous people follow. For that reason, it's become quite popular in…

Diet and nutrition
The Physiology of Fat Loss

Fat is one of the three essential macronutrients that give structure and energy to the human body, along with proteins and carbohydrates. However, it can also be counterproductive when too…