The Anti-Inflammatory Diet: What's It About?

Inflammation is positive for health, to a certain extent. To prevent it from getting out of control, we present you with the anti-inflammatory diet, which emphasizes the consumption of beneficial nutrients. 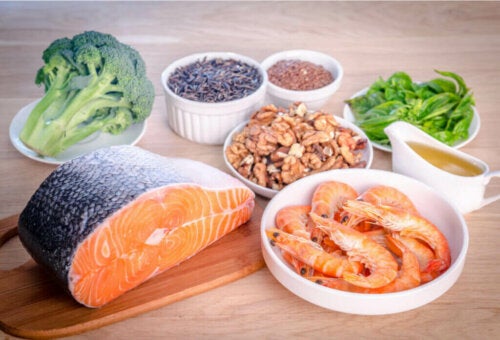 A lot of complex pathologies result from the body’s inflammatory processes, especially when they get out of control and lose their regulatory capacity. Well, the anti-inflammatory diet serves to avoid this situation, given that it’s capable of providing nutrients that modulate the body’s functioning.

First of all, we must note that inflammation isn’t a harmful process in itself. In all honesty, it’s a natural and necessary reaction; without it, life wouldn’t be possible. The problem arises when the human body loses the ability to control or inhibit inflammatory processes. It may come to a point where it becomes pathological.

The main characteristic of the anti-inflammatory diet is that it contains several nutrients that have been shown to reduce the processes of systemic inflammation. The most representative of all of them is the fatty acids of omega-3. These are present, above all, in vegetable oils, oily fish, and nuts.

In fact, there’s plenty of scientific evidence on the positive health effects of this class of elements. They’re capable, for example, of helping to prevent cardiovascular problems.

However, not only lipids have these properties. Many of the phytonutrients found in foods of plant origin are capable of blocking free radical production and reducing the incidence of inflammatory processes.

In this sense, curcumin stands out above the rest. This antioxidant, present in turmeric, helps prevent the development of multiple complex pathologies, such as cancer, as stated in a study published in the Nutrients journal.

Foods you should avoid

It’s important to bear in mind that in the anti-inflammatory diet it isn’t only necessary to guarantee the presence of certain nutrients, reducing the intake of toxic or harmful elements is also vital.

The main compounds that are capable of increasing inflammatory processes are trans fatty acids. These are formed when lipids are subjected to high temperatures. For this reason, it’s much better not to fry foods and, instead, consume the oils raw.

At the same time, it’s important that you limit the intake of simple sugars since they can cause alterations in your hormonal system and metabolic health. If you introduce them to your diet on a regular basis, you can stimulate pancreatic inflammation by over-demanding the organ.

Finally, it’s worth highlighting the need to avoid other toxic compounds derived from cooking at high temperatures. For example, acrylamide or polycyclic aromatic hydrocarbons.

Acrylamide comes from subjecting carbohydrates to high temperatures. On the other hand, hydrocarbons are formed when grilling meat (they adhere to it). Believe it or not, all of these toxins increase the risk of developing cancer.

Solid foods are important, however, liquids also play an essential role. First off, alcohol has the ability to promote inflammatory processes and generate inflammation at the liver level. For that reason, you shouldn’t consume it.

Similarly, it’s essential to avoid sugary soft drinks or those sweetened with chemicals, as they have a negative effect on the intestinal microbiota.

The liquid that you should consume the most in the anti-inflammatory diet is water. After all, it’s the major component of the human body. Furthermore, it transports nutrients throughout the body.

It’s pretty clear that following an adequate diet greatly reduces the risk of getting sick. Therefore, you must respect the basic principles of the anti-inflammatory diet. Modulating this process prevents the organs that make up the human body from suffering excessive stress.

To ensure success, we have to emphasize the intake of the nutrients that we’ve already mentioned, especially omega-3 fatty acids and phytochemicals. Of course, curcumin stands out too. However, any food of the vegetable kingdom contains them in its composition and it’s not mandatory to stick to consuming spices.

Similarly, it’s imperative to avoid the consumption of toxic products that are harmful to health, such as alcohol. Limiting soft drink intake and choosing the right cooking methods will be an advantage when it comes to seeking better health in the medium term.

Link copied!
Interesting Articles
Diet and nutrition
What Are The Health Benefits of Spinach?

Most people already know that athletes should include all kinds of vegetables in their diet. In a way, athletes tend…

Diet and nutrition
3 Benefits of Including Potatoes in Your Diet

If we think of food with excellent carbohydrate content, we have to give a special mention to potatoes. These tubers…

Diet and nutrition
4 Foods That Cause Cellulite

Cellulite is an accumulation of fat that usually occurs around the hip areas or the upper parts of the leg. It usually affects a large part of the female population.…

It's incredibly important to know which foods help maintain optimal energy levels. That way, your body will be able to…

Diet and nutrition
What Do Carbohydrates Do in the Body?

Carbohydrates are one of the three macronutrients that the body needs, and they basically consist of sugars, starches, and fibers.…