The Sirtfood Diet: What Does it Consist of?

The sirtfood diet is a dietary pattern that you must avoid. Keep reading this article to learn how detrimental this diet can be. 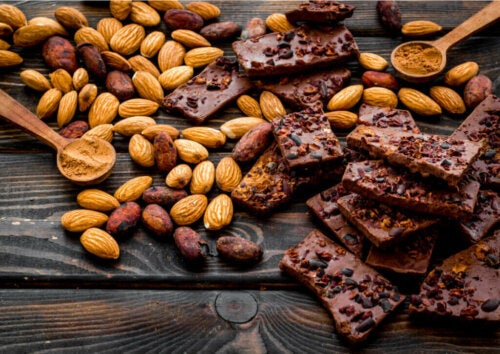 The sirtfood diet is an eating plan that several famous people follow. For that reason, it’s become quite popular in recent months. This dietary pattern promises the loss of up to three kilograms per week. That being said, it’s included within the ‘miracle diet‘ category.

First of all, we must note that this type of diet has its risks. But first, we’ll be telling you in detail what it consists of and the complications that can arise from it. Keep in mind that, although nutritionists designed it, it’s still a restrictive diet and there are better options to achieve good results.

The sirtfood diet, a diet that prioritizes enzymes

This dietary pattern prioritizes foods that contain sirtuin-type enzymes. These have the ability to simulate the effects of fasting, thereby helping to reduce inflammation in the body.

To reach this state, it’s necessary to draw attention to the intake of certain products such as coffee, cocoa, parsley, nuts, or olive oil. All of them contain phytochemicals or fatty acids to which various scientific studies attribute positive effects when it comes to inflammation modulation.

However, the sirtfood diet also allows certain foods that can promote the development of complex pathologies, such as alcohol. According to research published in the Methods in Molecular Biology book series, this drink can increase the risk of cardiovascular problems and even several types of cancer.

One of the most important facts about the sirtfood diet is that it drastically restricts caloric intake. According to this model, the individual must consume only 1,000 calories a day during the first week. They may do this through a single low-fat main meal, along with vegetable juices.

Of course, this protocol makes it difficult for anyone to meet their body’s protein and lipid requirements. This can induce metabolic problems in the medium term, in addition to a loss of muscle mass that conditions energy expenditure. In turn, this situation increases the risk of a rebound effect when returning to a normal diet plan.

However, things take a turn in the second week. The diet becomes less rigid since three meals a day are allowed. Once the 14th day has passed, there aren’t any more restrictions on food quantities, although only foods containing the aforementioned enzymes are allowed. This recommendation can lead to excessive consumption of caloric foods such as cocoa, or other toxic ones, such as wine.

There are many reasons not to follow the sirtfood diet. In the first place, keep in mind that it doesn’t respect the body’s nutrient needs (it’s deficient in proteins and lipids). For this reason, it’s possible to experience weight loss but from muscle mass, which is an overall negative situation.

On the other hand, it’s necessary to emphasize that allowing alcohol consumption in big quantities is never a good recommendation. As you probably already know, this substance is toxic and harmful to health. There are many scientific articles that show the damage it can cause to the body.

Additionally, during the last phase, the sirtfood diet allows you to eat as much food as you want. While it’s clear that counting calories aren’t the best option to lose weight, neither is promoting uncontrolled food consumption.

There are better options to enjoy a healthy body or to optimize your health. Now, bear in mind that better than dieting is to replacing inappropriate dietary habits with healthier ones.

Despite being popular and followed by celebrities, the sirtfood diet isn’t healthy at all. This eating plan is overly restrictive in its early stages and overly permissive in its final ones. Extremes are never a good option; wisdom resides in the middle.

For this reason, if you want to improve your health, we recommend that you change your dietary habits and replace those that are inappropriate for other healthy and sustainable ones. Of course, if you have any questions about the diet you should follow, or about the foods that best suit your needs, don’t hesitate to go to a nutritionist.

In brief, you should avoid ‘miracle diets’ at all costs since their risks often outweigh the benefits. They may promise many things, however, in practice, they tend to cause damage and an undesirable rebound effect.

Can You Avoid The Rebound Effect?
Gaining all the weight back after a diet is called the 'rebound effect' and in this next article we'll tell you how you can avoid it. Read more »
Link copied!
Interesting Articles
Diet and nutrition
What Role Does Taurine Play?

Most people already know that athletes should include all kinds of vegetables in their diet. In a way, athletes tend…

Diet and nutrition
The Anti-Inflammatory Diet: What's It About?

A lot of complex pathologies result from the body's inflammatory processes, especially when they get out of control and lose…