Athletes don’t always want to take medication that affects their performance. However, they may sometimes need to take prescribed drugs, such as the ones we tell you below, 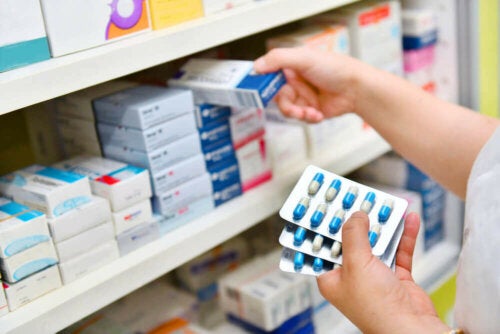 What if you’re prescribed an antibiotic and you have a competition coming up? What if you’re antibiotic hypertensive or taking diuretics and you want to hit the gym? Some drugs do affect sports performance. If you know which ones they are, it’ll be easier for you to act accordingly.

We’re talking about drugs prescribed by a doctor. In other words, they were indicated for a reason and aren’t used to avoid good sports practice. A very different case is that of steroids or anabolics that some athletes deliberately consume to enhance their performance.

We’re going to tell you how some commonly used drugs alter sports performance, such as antibiotics, anti-allergy drugs (antihistamines), diuretics, and antidepressants. Remember that a health professional should always advise you on treatment and you can discuss adverse effects with them.

Can a drug affect sports performance? Yes, and in different ways. The chemicals that you consume as drugs can act on the heart, the nervous system, the kidneys, and the liver. All of these organs play a role during exercise, hence their influence.

Mild allergic reactions are very common in the general population. Conditions such as rhinitis, hives, and seasonal conjunctivitis recur year after year in people with an allergic predisposition.

To relieve symptoms, it’s common to use anti-allergy drugs (antihistamines), such as diphenhydramine and loratadine. The latter doesn’t cause major problems, since one of the adverse effects of diphenhydramine was eliminated during its formulation.

On the other hand, diphenhydramine can cause a secondary reaction, which is numbness. The sleepiness the drug causes affects the central nervous system, slowing down responses and the ability to react. Reflexes become affected and it’s difficult to stay awake.

Thus, it’s clear that this drug affects sports performance. Therefore, athletes who are going to perform a specific activity shouldn’t take it, especially if the said activity requires active concentration.

In fact, this is so serious that entities such as the Argentine Society of Pediatrics promote the prohibition of sports among children and young people who take antihistamines.

Generally, we can’t say that the consumption of antibiotics affects sports performance. There’s no multi-centric research nor research that includes a wide range of antimicrobials to demonstrate their harmful effect on athletes.

However, a particular association is common. This association is the spontaneous rupture of the Achilles tendon, mainly among runners when they’re taking quinolones.

Beyond that specific fact, what you must understand is that infections requiring antibiotics exhaust the body. While the entire human defense system fights bacteria, it depletes energy resources that leave no room for added use by the muscles, for example.

Hypertensive patients that use diuretics may impair their sports performance

The drugs of choice for cardiac patients are diuretics. These drugs increase the patient’s volume of urine to decrease the load on the heart and, this way, lower blood pressure.

Examples of these drugs are hydrochlorothiazide, furosemide, and spironolactone. They all agree on the possibility of a main adverse effect, which is dehydration.

In sports, fluid balance is key. A diuretic can accelerate fluid loss. If the fluids aren’t replaced, and the athlete is perspiring, this can lead to hypotension, with an acceleration of the heart rate to dangerous limits and effort limitations.

Depression is a disease that disrupts all areas of behavior, including exercise, as it reduces the desire to go out, run, and interact with others. In these cases, psychiatrists frequently prescribe tricyclic antidepressants.

This group of drugs affects sports performance because they alter the heart rate. In addition, in some patients, they’re associated with cardiovascular problems. Although this isn’t something that happens to everyone, it must be considered.

However, playing sports is a non-pharmacological indication of depression and it’s good for these patients to be outdoors. The patient’s doctor will evaluate the possible adverse effects and will indicate the necessary complementary methods to determine the risk. Based on this, playing sports may or may not be contraindicated and the intensity will be regulated.

Don’t be scared. Taking a drug doesn’t mean that you should stop exercising or fear starting a new one. The medical professional will be the one who defines the scope of the drug and the adverse effects that could appear.

Exercise is part of the treatment of multiple diseases, and its benefits have been more than proven. If you know how certain drugs can affect sports performance, it’ll be easier to organize yourself to minimize risks.

They're not just a passing fad - fitness watches are here to stay. And there's an increasing number of models…

There are many different types of exercise, and each one is good for developing a different aspect of your physique…

When training, gluteus medius exercises often don't get the attention they deserve. Let's discover the best exercises to strengthen that…

They're not just a passing fad - fitness watches are here to stay. And there's an increasing number of models…

There are many different types of exercise, and each one is good for developing a different aspect of your physique…

Injury and prevention
How to Prevent Injuries When Playing Padel Tennis

Before taking up any sport, it's always a good idea to read up on considerations to prevent any injuries, and…

Cardio
All About the Rules of Road Cycling

Road cycling is a demanding competition that takes place in different locations around the world. In this article, we'll tell…