Gluteus medius exercises are essential in maintaining stabilization and strength. At the same time, they're often underrated. Why not try some of these exercises? 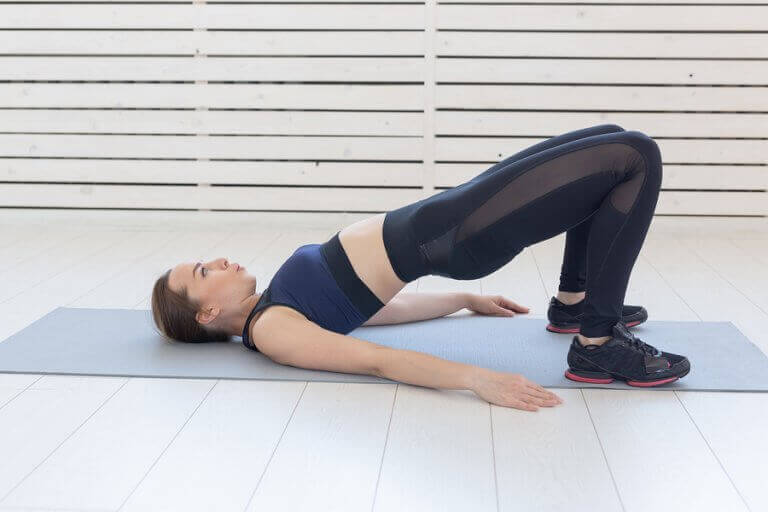 When training, gluteus medius exercises often don’t get the attention they deserve. Let’s discover the best exercises to strengthen that muscle!

Most of the time, we do exercises that are ineffective for this muscle or we don’t work it enough. In fact, it’s one of the most neglected muscles in any training routine.

As we mentioned in previous articles, it’s a muscle that has a main role as a stabilizer. Even so, it doesn’t get much attention for development. In today’s article, we’re going to talk about the two most important and effective training exercises for the gluteus medius.

The importance of training for the gluteus medius

Are these exercises better than others?

When it comes to muscle activation and recruitment, both glute bridge and hip thrust are much more effective than more traditional exercises such as squatting or dead weight.

When doing these two exercises, it allows us to achieve better results for strength and aesthetics. This is beyond what can actually be accomplished with this muscle.

Can we do both exercises at the same time?

The answer is “yes”.  Both the hip thrust and the glute bridge can be done perfectly well at the same time. Since we have to adapt them at all times to our physical level and to our training progression, we can use each one of them as well as their variants.

Along with the gluteal bridge is the hip thrust, the main exercise to affect the gluteus medius. However, the glute bridge is the best option if the athlete is just starting out. Take note, that this is the best choice if you want to begin training without previous experience.

First, you get into a supine position, which means face up and lying on the floor. Next, bend the knees, while supporting yourself by the soles of the feet. Then place your heels near the buttocks.

From here, raise the gluteus upward until you only support yourself by your feet and the scapula area. Then form a straight line with your back.

Arms stay flat on the floor at both sides of your body. It’s important that your palms are on the floor as well. This way you have a wider support base and you’ll have more stability.

To proceed, you raise your arms at a 90-degree angle. This allows you to activate the stabilizers since the support base with the arms is now lost. As a result, the center zone gains importance.

After we master the above steps we can move on, which will later allow us to do the hip thrust by bringing your knees closer together. As a result, we’ll reduce the support to a greater extent. Another alternative is to lift one of the legs.

The hip thrust, one of the best exercises for the gluteus medius

As we explained in the previous paragraph, the hip thrust is just the progression of the gluteal bridge. There are two ways to perform it:

After mastering the glute bridge, the next step for beginners is this one. You do this on the ground, first without weights. As you master this, you’ll add weights.

In order to do this, you sit on the floor, with your back against the bench. The legs are bent with the feet fully supported. The hip thrust is one of the best exercises for gluteus medius.

Next, we slowly push the hips upward to reach a 90-degree angle with the legs. You’ll keep that position for several seconds. Then return to your initial posture.

Hip thrust with a bar

Once you master this free exercise or maybe with a little weight, you’ll introduce the bar. Of course, it’s not beneficial to add weights without using the technique mentioned previously.

To begin, you take a seated position on the floor. Just like the free exercise, you support your back on a bench. In this, you’re supporting the upper back area. Knees and feet are in the same position as with the free weights.

Here comes the important part: first pick up the bar and put it over the thighs. It’s fundamental to put some protection on so that the bar doesn’t bother you, which would make it impossible to do this.

With the bar in place, slowly flex and extend the hips, while holding the weight the entire time. Continue to hold this position for a few seconds and then return to the original position. This will be the key to good control of breathing since it’ll help you to be more effective.

The number of series that we do should never be less than three or more than six. Experts recommend doing between 8-12 repetitions for each one of them.

Conclusions about the gluteus medius exercises

As we’ve said previously, the gluteus medius is the principal stabilizer of the hips, but we don’t give it the importance that it requires. Here we have two resources to change the situation. Start using these two exercises for the gluteus medius and you’ll see how quickly you’ll get the results that you want. Now begin!

When it comes to fitness and sports, new innovations are always emerging. An example of this is electrofitness, a discipline…

When it comes to athletes, it's often necessary to increase energy levels. Either due to excess demand in training or…