How to Prevent a Side Stitch and Heartburn

A side stitch usually comes hand in hand with heartburn, but beyond these two conditions showing up at the same time, they can both cause a considerable decrease in your performance. They have little in common with one anther, but, don’t worry! There are effective methods to avoid these nasty symptoms appearing in the middle of your training. 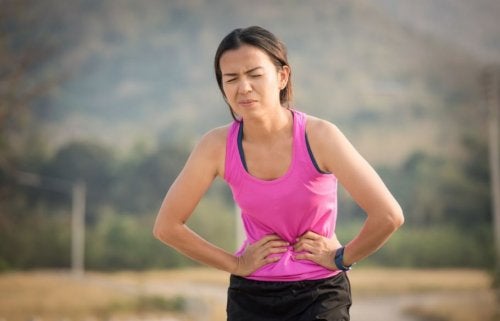 A side stitch, otherwise known as a stitch, and heartburn are two of the most feared afflictions by anyone who practices sports. They tend to appear suddenly, causing disturbances, that in the worst-case scenario force you to stop the physical activity.

For a long time, it was thought that the stitch was a product of gas accumulating in the intestine. This then triggered severe pain in the abdominal area during high-intensity training.

Even though there isn’t a conclusive thesis explaining the stitch phenomenon, most theories place the stomach as the place of origin of this type of discomfort.

Abdominal pain is typically associated with runners, but it can also affect cyclists, swimmers and those who practice other disciplines that require abrupt movements.

Because of this, the reason that’s more widely accepted by the medical community for the cause of abdominal pain is the oscillations of the body itself during exercise.

This type of argument explains why the pain doesn’t always appear in the same spot and why it doesn’t affect every person the same way.

Another hypothesis is that the stitch is a product of tension produced between the ligaments that connect the diaphragm with the stomach. This situation gets worse when the digestive organ is full. On the other hand, poor breathing is also within the list of possible causes.

How to avoid it

The first thing to avoid having a stitch is not exercising immediately after eating. Wait at least two hours between your last meal and your workout. It also helps to have a meal that is light, easy and fast to digest. Avoid abrupt movements and sudden jumps.

It’s common to come across runners and cyclists that present abdominal pain during their competitions. Particularly right after hydrating. This could be associated with the sudden change of weight that the diaphragm has to hold. The diaphragm will already be strained from the physical activity being performed.

For this reason, physical trainers advise that athletes should practice drinking liquids during training, in the same way, that they’ll consume them during competitions. It’s recommended to drink in small and fast sips and to hydrate before you become thirsty.

Correct breathing is another aspect that you should consider. It’s a factor that, besides being linked to the stitch, is vital to achieving adequate sports performance.

Heartburn can have multiple causes. In fact, it’s a chronic disease that affects around 15 percent of people worldwide. But during physical activity, people can also experience episodes of heartburn that sometimes affect the throat and mouth.

The stitch and heartburn during training sessions usually have one common factor: a full stomach. The movements made during physical activity don’t allow the stomach to hold the food. This means that the food moves up, combined with gastric acids, to the esophagus.

Preventing the stitch and heartburn from affecting your sports performance

A well-balanced diet is of great importance for top performance; it will also help avoid abdominal pain and heartburn during your training.

To maintain a good diet, it’s not only important to keep in mind the quality of the products or reducing the intake of chocolate or caffeine. You should also respect the hours you eat and not over indulge with the size of the portions.

Abdominal Routine
In this article, you will find several abdominal exercises to help you build a routine to create strong, toned, and defined abdominal muscles. Read more »
Link copied!
Interesting Articles
Health
Sports Frustration and How to Beat It

Intestinal problems are a fairly common disease in the population. They cause major discomfort for many people and can affect…

SPORTS PSYCHOLOGY
The Personality Traits of Goalkeepers in Soccer

In soccer, the personality traits of goalkeepers are often quite different from those of the rest of the team. Goalkeepers…

The Achilles tendon rupture is a serious injury, so much so that it even prevents the patient from walking normally.…

Stage fright in sport is something that every athlete should know about so that they can handle their emotions and feelings before an event. In this article, we'll tell you…

Unfortunately, when it comes to medical examinations before taking up a new sport, even doctors are in disagreement. Whilst there…