Muscles are contracting structures that are essential for movement. But, they also serve other functions as well. Let's look at the most important muscles in the thorax and abdominal regions. 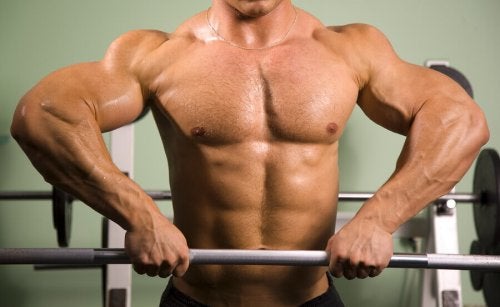 Muscles are structures that contract and relax to help us move. The whole body is covered in muscles. In today’s post, we want to focus on the thorax and abdomen muscles. Other than being essential for movement, they’re also crucial for maintaining posture and protecting internal organs as well.

The thorax covers the region that starts from the base of the neck leading to the diaphragm. It encompasses important organs such as the lungs, heart, and esophagus. The body also employs its skeletal system to protect these vital organs: the ribs and sternum.

The thoracic muscles are located just outside the ribs. In addition to playing an important role in our movements, they also protect the organs. Continue reading to learn about the most important muscles in this area and their functions.

The pectoralis major is a thick, flat muscle. It’s also the most important and strongest muscle in the anterior surface of the thorax. The muscle fibers stem from various areas: the clavicle, sternocostal joints and the costal cartilage in the abdominal region. This is inserted into the lateral lip of the bicipital groove of the humerus.

The pectoralis minor is thin and triangular-shaped. It’s smaller than the major and lies underneath it. It starts in the coracoid process of the shoulder blade and divides into three sections, which insert into the anterolateral surfaces of the third, fourth and fifth rib.

The serratus anterior is located on the border of the shoulder blade. It divides into three sections that insert into the anterolateral surfaces of the first ten ribs. The serratus anterior helps stabilize the body and also prepares other muscles for moving the upper limb away from the midline of the body.

The external and internal intercostal muscles completely cover the intercostal spaces. Their sizes vary and each covers specific areas. However, generally speaking, they play an important role in respiration, especially during exercise.

The latissimus dorsi muscle is the biggest and most powerful muscle in the thorax region. In fact, it’s one of the strongest muscles in the entire human body. It attaches to all the vertebrae starting from the D7 vertebra and extends to the top of the sacrum and only consists of ascending muscle fibers.

The fibers insert into the intertubercular groove of the humerus. This muscle allows for abduction, internal rotation and extension movements for the homolateral upper limb.

The abdomen is the cavity that lies under the thorax. The diaphragm separates the two areas. Sitting above the pelvis, the abdomen houses many organs. Most of the organs belong to the digestive system such as the large and small intestines, stomach and liver. But, other organs, such as the kidneys, spleen, and pancreas are also nestled in this region.

The cavity needs a thick muscular layer to protect the organs in place. Should they bulge out of the cavity, hernias or protrusions can result as a consequence.

These muscles form concentric layers. From inside out, you’ll find the transverse and rectus abdominal muscles in the wall. Furthermore, the internal and external oblique muscles are located closer to the surface.

These muscles have many functions such as stabilizing the spine and compressing the organs, keeping them inside the abdominal cavity. Thus they contract and relax in processes such as urination, bowel movements, vomiting and even giving birth.

Furthermore, they also play an essential role in exhaling during physical activity. The famous washboard abs are a part of the rectus abdominal muscles and the lines that separate them down the middle are called the “white line”.

In the posterior wall you’ll find the lumbar triangle, which is formed by the thoracolumbar fascia. The muscle extends towards the latissimus dorsal muscle– take a moment to consider how large that is!

Wrapping up, this complicated structure forms our upper body. Learning about our muscles is no easy task– there are so many of them! But, the most important thing is to stay fit and active to keep your body healthy!

Aging and Exercise: How are they Related?
Regular exercise can lead to biological, genetic and physical changes that can have an impact on aging. Change your lifestyle habits for the better! Read more »
Link copied!
Interesting Articles
Health
Causes of Lumbar Hyperlordosis

Being overweight can affect aesthetics, as well as your heart and overall health. Having a higher percentage of fat than…

Achieving personal success is an attractive goal for many. People want to achieve the goals they set for themselves in all aspects of life, including sports, work, education, and relationships.…

It's possible to boost your lung capacity by working out. However, you can't do this overnight. In reality, it takes persistent…