This famous German driver is the four-times Formula One World Champion, and is regarded by many as one of the greatest drivers in the history of the sport. 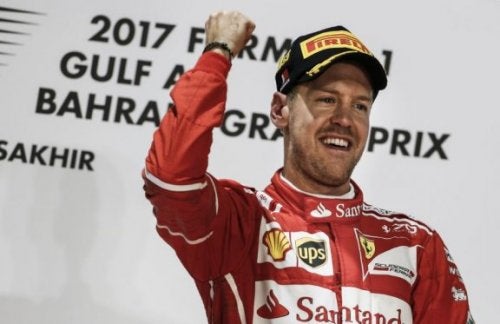 For most people, adolescence is a time that’s full of insecurities and clumsiness. However, it’s also a time when some people start showing and developing new skills. This is the case for Sebastian Vettel, who made his way into the racing world and secured his place as one of the sporting greats.

He was born on the 3rd of July 1987, in Germany. At the tender age of eight, he was already behind the wheel, competing in the karting category. He demonstrated his skills by winning several championships.

In 2003 he landed a spot in the junior racing for single-seater cars, the Formula BMW. During this competition he had no rivals, winning 18 out of 20 races.

Then, in 2005 he made his debut in the Formula 3. Thanks to his victory during the previous season of the Formula BMW, he was allowed to try an F1 single seater car, the WILLIANS FW27. He continued to compete in Formula 3 winning multiple times.

Sebastian Vettel’s leap into Formula One

His top performance didn’t go unnoticed. In 2006 he became a test pilot for BMW Sauber, and he got to debut in the US Grand Prix as Robert Kubica’s substitution.

Following this performance, alongside his winning repertoire, he caught the attention of another F1 team. In 2008 he became team Toro Rosso’s official driver. During his first season with the team, he qualified for pole position and became a polesitter. He secured a victory in the Italian Grand Prix.

The following year, the young driver signed with the Red Bull team. Even though he fought until the end, he didn’t win the championship.

With skill and determination, Sebastian Vettel was just getting started. Between 2010 and 2013 he won four consecutive World championship crowns. He became, at 25 years old, the youngest three-time and four-time champion in the history of the competition.

In 2015, the German driver took a position in the prestigious Italian team Ferrari, after the departure of Fernando Alonso. His arrival to this new team made many people believe that he would return the glory days to the “il cavallino rampante”.

Even though he has won several times and he’s set new records for the team, and despite having been a driver for Ferrari for many seasons, he’s not yet won the crown for the Italian team. He still has many years in his career left, and if luck doesn’t fail him, it’s just a matter of time for him to win.

Sebastian Vettel on the road

He’s one of those drivers with innate talent. His driving skills are sharp and he’s always striving to get the most out of his car and his talent.

Probably his biggest flaw is his lack of control while under pressure on the road. This is something that has made him endure a lot of criticism from Italy.

There are those who claim that he’s a conservative driver, who doesn’t push himself, which for some, diminishes his showmanship. But none of this has ever put his capacities in doubt.

For some drivers, their main enemy is their own ambition or ego, and not knowing how to control this. This pressure has affected him more than once in different races.

Vettel is a highly skilled driver, but sometimes he doesn’t seem to process the options in front of him during the race, which generates doubts.

However, if one thing is clear about Sebastian Vettel it’s his precision to feel and appreciate the potential of each car. Maybe that’s the reason why he’s always held in high esteem by the mechanics and engineers of the different teams he’s been a part of.

Even knowing his skills and capacities, this driver is aware that he doesn’t always have all the factors under control that influence this type of racing category. Every year, responsible bodies and regulators are introducing new changes.

Besides, nowadays it’s not only the driver’s skill that wins races but also the car’s potential.

Racing in this high-level category and knowing Ferrari’s high demands, we know that Sebastian Vettel will bring his best to the game. Perhaps next season we’ll see him reach the highest step of the podium.

How Is Formula One Different Now From Ten Years Ago?
We'll take a look at how Formula One has changed in the last three years, with impressive aesthetic and safety advances. Take a look! Read more »
Link copied!
Interesting Articles
MOTOR SPORTS
All About the Indianapolis 500