Due to the vital importance of oxygen for the functioning of the human body, breathing is an indispensable mechanism. Given the demands of sports, its even more important. 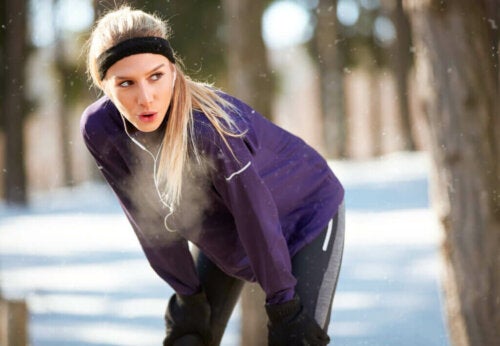 Importance of breathing for muscles

After inhalation, the oxygen descends until it reaches the lungs. At that time, gas exchanges take place in the pulmonary alveoli, through blood vessels.

When this oxygen reaches the pulmonary alveoli, whose wall is highly vascular, hematosis occurs, that is, oxygenation of the blood. Afterward, the oxygen travels through the blood to finally reach the muscle, at the level of the mitochondria.

There, glucose or lipids are metabolized to produce the energy necessary for muscle contraction. As a final step, carbon dioxide passes from the blood to the alveoli to be eliminated in the exhalation phase.

When the amount of air inhaled by the lungs is insufficient, the blood can’t be properly purified and the organs don’t get the energy they need to function as they should.

As a consequence, it can affect your performance if you don’t breathe properly. In the next section, we’ll talk about diaphragmatic breathing, a technique that helps you to better use your full lung capacity.

The diaphragm is very important during breathing. When you breathe in, it contracts and becomes flatter, allowing the chest cavity to increase in volume and let air into the lungs. When the diaphragm relaxes, it presses on the lungs and the expels air to the outside.

We define the breathing that people normally do as thoracic. This is located in the middle and upper areas of the lungs. In the majority of cases, it doesn’t use the lower area, which is the largest area.

For this reason, it takes a greater number of respiratory cycles to provide the body with the oxygen it needs. This increases the heart rate and leads to inefficient breathing.

Using your diaphragm will increase the volume of oxygen that reaches the lungs, due to its descent towards the abdominal area. This makes it easier for the air to reach the lower part of the lungs and logically occupy the entire storage space.

First, the lower part of the lungs (abdominal phase) is filled, then the middle part (thoracic phase), and finally, the highest part is filled. This is called the clavicular phase and it allows you to take a full breath.

Conversely, using your diaphragm during breathing allows you to eliminate a greater amount of carbon dioxide, thanks to the upward push it makes during exhalation.

We should note that breathing through the nose is often recommended, but if you’re doing high-intensity training, it’s likely that you won’t get enough oxygen. Therefore, it’s best to make sure breathing is comfortable so that you can guarantee your body is getting enough oxygen.

Every sport is different

Keep in mind that not all sports work the same physical abilities. Therefore, energy demands, oxygen debt, and type of breathing will also vary.

For example, in cardiovascular activities such as cycling, walking, running, or swimming, breathing should be regular and rhythmic, not forced. Generally, exhalation should be longer than inhalation and, depending on the pace of physical activity, you should find a steady respiratory rate.

On the other hand, in bodybuilding, when working on muscular hypertrophy, the most common technique is to inhale in the eccentric phase and exhale in the concentric phase.

By using a breathing technique such as the diaphragm technique, both dynamically and statically, you can achieve the following benefits in addition to improved performance:

In sports, you also have to train your breathing to improve performance. Having control of your breathing will help you optimize energy and, therefore, will also reduce fatigue. Feel free to put diaphragmatic breathing to the test to compare your results!

The Importance of Breathing in Sports
Respiration is a complicated process. However, t's essential to understand it so you know why breathing in sports is important. Read more »
Link copied!
Interesting Articles
Others
Aerobic Exercise Medical Recommendations

Ironman races are the most demanding triathlon competitions since participants need to cover three distances in the shortest possible time.…

It's good to do any kind of physical activity if you want to lose weight. In fact, walking is one…

How can you penalize ideologies, beliefs, and viewpoints? And that's exactly where the problem of racism lies in sports. The history of athletic racial discrimination began right alongside the professionalization…

Perhaps you think 'doing cardio' is for very fit people, or for people that have been training in the gym…