Here we are in the 21st century, still seeing racism in sports. Not only is this a matter of safety, but social education as well. 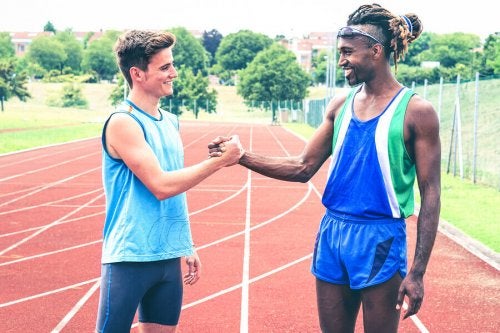 How can you penalize ideologies, beliefs, and viewpoints? And that’s exactly where the problem of racism lies in sports. The history of athletic racial discrimination began right alongside the professionalization of the sports themselves. While things have changed, many of the problems still linger.

We’ve come a long way from the times when Jackie Robinson signed a contract accepting racist insults and scorn. But today, we can still see racism in action. In our current world of sports, these racist displays are for all to see thanks to the media.

How are racist insults used in sports today?

Today, some people choose to use racism as a way to break through an athlete’s concentration. And soccer just might be the prime example to see these disturbing sorts of behaviors.

Racism doesn’t just occur in Men’s Soccer leagues around the world. For example, in February 2019 the Women’s soccer team Barcelona F.C.’s coach reported a racist insult towards one of the players. The victim, Andressa Alves, was expelled from the game after responding aggressively to the insult.

Furthermore, racist remarks aren’t exclusive to soccer fields. Major League Baseball and Euroleague Basketball have also documented recent offenses as well. Another problem with racist expressions is that they can come from anywhere and attack anyone.

Anyone can be a victim of racism

Professional athletes have direct contact with other players and the public. And their public often hurls racist chants and expressions their way. But it doesn’t always flow in that direction. On April 6, 2019, an employee of the R.C.D. Espanyol team used a racist expression against a fan.

On a similar note, players aren’t the only ones who turn to racism to throw off their opponents. There have been incidents where entire sections of viewers singled out players with racial insults.

The terrible reality that was Jackie Robinson’s has also touched current soccer players such as Mario Balotelli, Samuel Eto’o and more. Coaches, referees and others who form a part of the game of soccer have also been victims as well.

Racism is hard to rule, but we’re seeing progress

Unfortunately, it isn’t easy to penalize racism in a sports context. Despite the fact that racist comments are negative expressions, trying to stop them goes against freedom of speech.

On top of that, some countries don’t even consider racism to be bad. Russia is the prime example, which became very clear during the 2018 Olympic Games and World Cup.

However, UEFA is making an effort to penalize racist displays. In the 14th article of their Disciplinary Regulations, they outline a punishment for racial instances that violate a player’s dignity. Now, a referee can stop a match on the grounds of racial insults, even from fans.

When referees make a call against racism, the soccer clubs are the ones who have to face the consequences. Not too long ago, referees punished three European teams with partial suspension in addition to a fine: Lazio, Dinamo de Zagreb, and Shakthar Donetsk.

But progress comes easier in an internationalized sport such as soccer. In other sports, such as baseball or basketball, racial matters and how they are handled depend entirely on the idiosyncrasy of the country in question.

Racism in sports: education is key

Just as we are seeing in the United States, it seems that many sports institutions are opting for educational campaigns. At the end of the day, racial discrimination is an idea and the fight against it has to start in the mind. While you can’t censor all and every racist expression, you can educate each generation to be more open-minded.

Sports media also plays a big role in fighting against racial acts. Re-educating a public takes a long time, but it could very well be the most effective solution. FIFA’s “Say NO to Racism” campaign is a great example of anti-racism propaganda.

To wrap up, racism is a problem in the sports world that goes beyond athletic performance. Nelson Mandela broke segregation in South Africa through rugby. Today, sports authorities also have racism on their agendas.

The Best Cyclists in History
Bernard Hinault, Eddy Merckx and Miguel Indurain are some of the best cyclists in history. In this article, we review the achievements of these legends. Read more »
Link copied!
Interesting Articles
Others
Aerobic Exercise Medical Recommendations

Others
Breathing Techniques for Good Performance

During physical activity, breathing increases to allow more oxygen in the body and thus, increases energy production. In this article,…

Ironman races are the most demanding triathlon competitions since participants need to cover three distances in the shortest possible time.…

It's good to do any kind of physical activity if you want to lose weight. In fact, walking is one…

Perhaps you think 'doing cardio' is for very fit people, or for people that have been training in the gym…