The Best Beaches for Running in Spain

Chosen by runners and by those who exercise during summer vacation, here are the best beaches for running in Spain. They're just waiting for you to enjoy them! 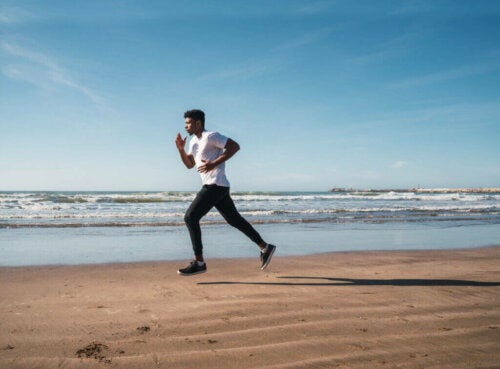 Are you looking forward to a vacation where fitness is present? Do you want to get the most out of your days at the beach by working out? If so, you’ll be interested to know the best beaches to go running in Spain. Check out our suggestions!

You can get up at dawn and enjoy the deserted sands, the sound of birds singing, and the waves of the ocean… or you could go for a run on the beach during a beautiful sunset when there aren’t many people around. In any case, wear proper footwear, sunscreen, and don’t forget a hat and sunglasses.

Which are the best beaches to go running in Spain?

If you’ve not yet chosen your holiday destination, consider the following Spanish beaches for running. We guarantee you, they’re spectacular!

At 4,500 meters long and along a sandy cuspate foreland, this Cantabria beach is really breathtaking. One of the reasons runners choose Playa del Puntal in Santander is because of how isolated it is. You can only access it by boat from the Santander city or by walking from Somo town. It’s perfect to train at your own pace.

Keep in mind that El Puntal has quite strong waves, so it’s best to go running when tides are low, both early in the morning and at sunset.

At 14 kilometers long, Cofete is one of the best beaches to go running in the Canaries. Its wild “looks” make it the perfect habitat for local fauna, such as turtles. You might actually come across some of them during your workout!

It’s one of the most popular beaches for running, mainly due to its impressive views. The best time to go running in Puerto de Bares is at dawn, as long as there are low tides. At more than 1,500 meters long, one of the most beautiful features is the quartz rock that divides it into two parts.

The list isn’t complete without the Balearic Islands. It’s a common destination for a summer vacation and one of Spain’s most beautiful places.

With crystal-clear waters, white sand, and the famous Camí de Cavalls, Menorca attracts many runners every year, although it doesn’t have outstanding slopes for a more intense workout.

Runners love this beach so much that they’re filling the web with tips for running on it, such as hydrating well beforehand or always running on wet sand.

Las Teresitas beach is 1,300 meters long and it’s perfect for running early in the morning or late in the afternoon, always being careful of the shore’s unevenness.

Within the Barreiros town hall, you’ll find no less than nine different beaches to go running on. There’s even a very popular 10-kilometer race taking place every year.

Each of Barreiros’ beaches has something special to offer; you can go from one to another by running on the wet sand. Some are more crowded than others, so choose the one you like the most!

This one’s without a doubt one of the most amazing beaches in Cádiz, and also one of the best beaches to go running in Spain. At five kilometers long, after a good run, you’ll want to dive into the astonishing sea.

The best time to go running in El Palmar is definitely in the late afternoon, which will allow you to enjoy pristine sand dunes between the Atlantic and Conil de la Frontera.

We must end this list with some honorable mentions: Playa Larga (Tarragona), Soto de la Marina (Cantabria), and La Palma (Canary Islands). There’s an option for every runner out there!

Tips for Running at the Beach
Running at the beach is a full-body workout requiring more endurance. In this article, we'll share a few tips to keep you from getting tired too quickly. Read more »
Link copied!
Interesting Articles
Cardio
Running to Lose Weight: Key Tips

Long-distance and marathon runners are all too familiar with runner's diarrhea. While it might be difficult to believe, this is…

When we talk about the runner's knee, we're referring to iliotibial band syndrome. Those who run and have a poor…

These days, running is a really popular way of exercising, but many people don't actually know much about the technical…

The medical community and those who practice this sport continuously praise the health benefits of running. It's an exercise that…