Here we'll show you a couple of recipes for oatmeal protein pancakes. You could make them with different ingredients to the ones we suggest, provided that they're healthy ones. Still, the main ingredient for these recipes are oats. 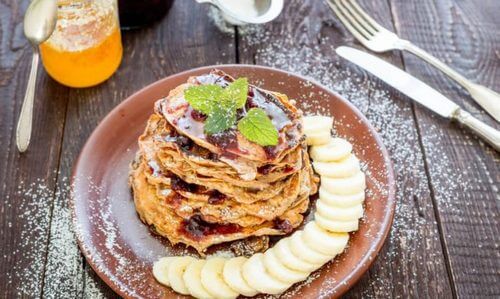 Begin by choosing a bowl that’s big enough to mix the oat flour, yeast, salt, and cinnamon. Take another bowl and mix the yogurt, egg, milk, honey, and vanilla extract.

Once mixed together, add the wet ingredients to the dry ones, and mix until well combined. Then, add the chocolate flakes and keep mixing.

If your mixture is very thick, simply add a little more milk, until you’ve reached the desired consistency. Next, spray a fine mist of oil in a pan, to lightly grease it.

Repeat until you’ve used all of the mixture, and you now have oatmeal protein pancakes with chocolate. If you have a sweet tooth, you can serve them with chocolate syrup on top.

Start by mixing the whole wheat flour, oat flakes, yeast, and cinnamon in a large bowl and put aside. In another bowl, beat the egg white with the milk; then, add the brown sugar and yogurt. Mix until well combined.

Add the vanilla and keep mixing. Then, as with the previous recipe, mix the liquid ingredients with the dry ones, until the mixture is not too hard and not too dense.

Once you’ve used up all of the mixture, you’ll have whole wheat oatmeal protein pancakes that are ready to serve. It’s always best to eat them immediately, although you can store them in the freezer for up to two months.

In conclusion, oats are beneficial for your body. As such, you can and should use them in as many different recipes as possible. In this article, we explained how to make oatmeal protein pancakes, with either chocolate or whole wheat flour for healthier options. Still, there are countless other ingredients that you can add to these cereal grains.

An Easy, Healthy and Tasty Breakfast
You have probably heard that breakfast is the most important meal of the day, and as such, you have to try to eat a healthy diet. Read more »
Link copied!
Interesting Articles
Diet and nutrition
Teatox: What Does it Consist of?

Diet and nutrition
The Benefits of the Murcian Diet

The Murcian diet is characterized by its high fish and vegetable content. These foods provide countless health benefits if you…

Lose weight
How Many Calories Do You Have to Burn to Lose Weight?

Losing weight is a relatively simple task when you're aware of a few key concepts. The key to losing weight…

Diet and nutrition
The Appropriate Diet for Coeliac Patients

Individuals with hypersensitivity to gluten must watch what they eat at all times. Eating the wrong foods can cause them…

Diet and nutrition
Which Fruits Contain the Most Calories?

Diet and nutrition
Teatox: What Does it Consist of?