The Relationship Between Iron and Diet

What is iron deficiency anemia? How can you improve the absorption of iron from the foods that make up the diet? In the following article, we'll delve into the relationship between iron and diet. 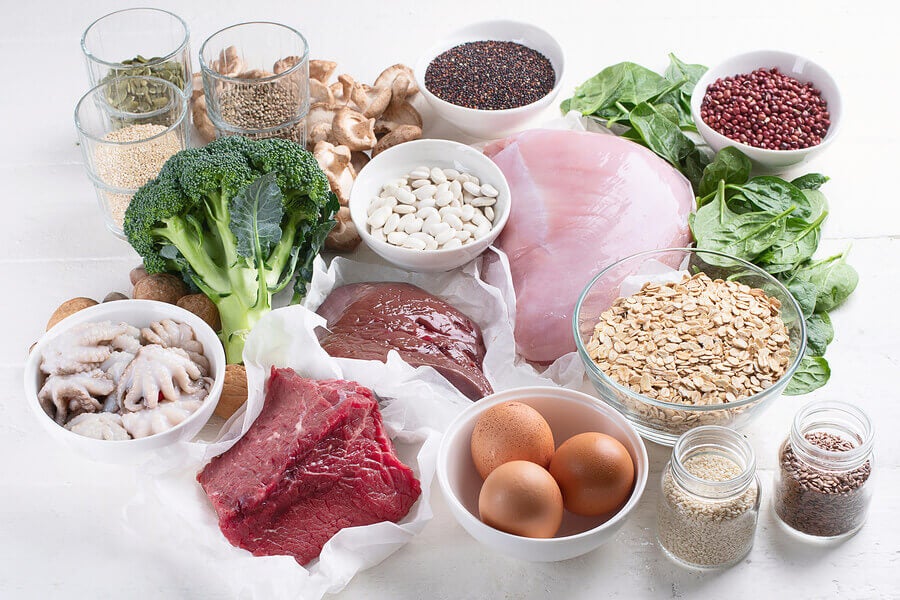 Iron is present in all body cells. However, this compound is rarely alone. It’s almost always bound to proteins or, freely, such as hemoglobin, myoglobin, or bound to respiratory enzymes. It can also be linked to storage proteins such as ferritin or hemosiderin. Here’s everything you need to know about the relationship between iron and diet.

Iron and diet: how they’re related

Iron absorption is inversely proportional to the amount contained in the food. Of the iron that’s ingested, it’s absorbed–between one and 50 percent.

Your body is smart: if you’ve suffered from blood loss or anemia, there’s an increased synthesis to replace iron, so more is needed and there’s a greater percentage of absorption.

The variability of iron absorption depends, above all, on the way in which it’s present in food as well as on the dietary factors that modulate its absorption, rather than on the amount ingested.

In this sense, heme iron comes from the food of animal origins. Your body easily absorbs this type of iron and you use a relatively large percentage – between 20 and 75 percent – because it enters easily and has almost no absorption inhibitors.

On the other hand, non-heme iron comes from plant-based foods, and their bioavailability is lower. This means that it’s more difficult to mobilize and use it, but that doesn’t imply that it’s of lower quality. To improve its bioavailability it can be consumed together with certain activators.

Calcium inhibits the absorption of heme iron, while the consumption of meat (along with foods rich in it) favors its absorption.

In the case of non-heme iron, you can absorb it better when you take it alongside foods rich in ascorbic acid, citric acid, malic acid, and animal proteins.

You need to look for healthy sources of iron to add to your diet. What’s a good option? You could try a plate of lentils! Lentils are a source of plant-based protein-rich in the nonheme type. In other words, they contain less absorbable iron than a beefsteak.

In order to enhance the absorption of iron from lentils, you can consume them alongside an activator, such as ascorbic acid. How does this work?

Ascorbic acid, also known as vitamin C, is present in citrus fruits such as lemons, oranges or strawberries, and in other foods such as tomatoes or vinegar, among others. Thus, one way to favor the absorption of iron from lentils is to take an orange for dessert or accompany the lentils with sweet pepper.

In the case of non-heme iron absorption, the most prominent inhibitors are calcium, phytates, oxalates and non-animal proteins.

Phytates are common in the bran and germ of cereals, legumes, and seeds. Spinach, chard or chocolate are good sources of oxalates that, as already mentioned, hinder the absorption of nonheme.

Fifteen percent of the world’s population suffers from iron deficiency. This can vary from a moderate decrease in reserves – ferritin – to iron deficiency anemia, which occurs when depletion levels are very high.

Having an iron-rich diet

To get adequate iron intake, you should consume foods rich in bioavailable iron and, when necessary, add iron supplements. Here’s how to have an iron-rich diet:

Overall, the relationship between iron and diet is very important. As with most essential nutrients, it’s best to ingest this mineral in the right proportions. Speak with a professional when the need arises to remedy the situation.

The Importance of Iron Supplements for Runners
By taking the right iron supplements, we can get positive results that directly impact on our competitive performance. Read more in this article! Read more »
Link copied!
Interesting Articles
Supplements
When to Take Creatine

Useful supplements are nutrients or substances that improve sports performance or certain functions of the human body. Many of them…

Diet and nutrition
Is Creatinine Harmful To Your Health?

Creatinine is a waste product produced by the muscles. The kidneys work to filter it from the bloodstream, excreting it…

Diet and nutrition
How Much Protein Intake is Needed After Exercising?

Protein is the macronutrient involved in muscle recovery. Therefore, protein intake is essential in the moments before and after a…