Any doubts about the existence of exercise-induced anaphylaxis were put to rest in 1979, when doctors confirmed the first ever case. In this article, we'll tell you more about this rare disorder, and how to prevent it. 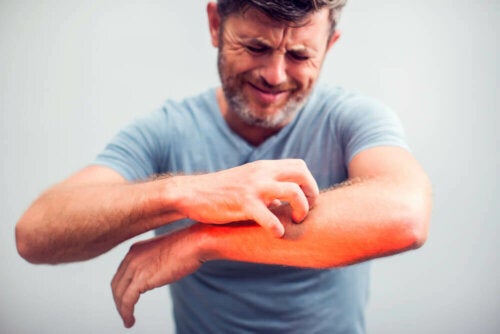 In 1979, scientists were finally able to prove the existence of exercise-induced anaphylaxis. The first confirmed case was in a marathon runner, who frequently suffered from allergic reactions while exercising.

The medical team that treated and studied the marathon runner looked for any allergens that might have been the cause of his exercise-induced allergic reaction and discovered that it was actually caused by an underlying food allergy. As it turned out, the runner had a habit of eating shellfish shortly before his workouts.

Exercise-induced anaphylaxis (EIA) is an allergic reaction that occurs after ingesting allergenic foods. The effects of the physical exertion then trigger a chemical reaction in the body, with the primary trigger thought to be an increase in body temperature.

Currently, we don’t know how many athletes suffer from EIA around the world, as it’s difficult to determine with any certainty how prevalent the condition actually is. However, it’s a topic that’s receiving more and more attention and is frequently the subject of investigations and research.

Also known as food-dependent exercise-induced anaphylaxis, symptoms of this condition can vary from person to person. However, widespread flushing of the skin is almost always present.

Which foods can provoke exercise-induced anaphylaxis?

We already know that exercise-induced anaphylaxis is actually a food allergy, which is triggered by exercise. But what foods can trigger this kind of allergic reaction?

Nuts and cereals, which are popular among athletes for their great nutritional value and high-calorie content, are some of the most common allergens. And, of course, we can’t forget about shellfish, the allergen behind the first-ever confirmed case.

It’s also important to consider the length of time between ingesting the allergen and taking part in physical exercise. In many cases, if the athlete consumes the allergen more than six hours before exercising, there’s no noticeable reaction. As such, exercise-induced allergies are believed to be time-dependent.

The increase in body temperature can trigger a reaction

When exercising, we increase our energy production to allow us to move our muscles. This releases heat, which builds up in our cells. In order to control our body temperature, the hypothalamus must send out certain signals, one of which causes us to sweat. This helps to take away much of the excess heat we produce during exercise.

Sweating helps to keep us alive and stops our insides from boiling. While our sweat glands have to work hard in order to control our temperature effectively, ultimately, it’s the neurotransmitter acetylcholine that is responsible for this function. The hypothalamus uses acetylcholine to communicate with the sweat glands.

As well as commanding our glands to produce sweat, this neurotransmitter also increases the activity and circulation of defense cells, known as mast cells, which contain histamine. Mast cells travel to and from the skin, lung tissue, and stomach.

Treatment and prevention of exercise-induced anaphylaxis

As we’ve already seen, exercise-induced allergies are actually a type of food allergy, caused by sweat, mast cells, and histamine. The whole process begins after the initial ingestion of an allergen, ie. the substance you’re allergic to.

Needless to say, the best thing you can do in order to prevent an allergic reaction is to avoid allergens. Ideally, you should never eat anything you know you’re allergic to. However, in the case of mild food allergies, athletes should be particularly careful to avoid any allergens before exercising.

An athlete’s eating plan should include an allergen avoidance period, starting up to six hours before training. By including this allergen-free period, they can reduce the chances of an allergic reaction.

The use of antihistamines before or during exercise proved ineffective when it was tested in the context of a scientific study. It’s also important to remember that these drugs do have some side effects, such as drowsiness – something which athletes naturally want to avoid.

Exercise-induced anaphylaxis is rare, but not impossible

This is a fairly rare condition, but cases have been recorded across a wide variety of different sports. An accurate diagnosis can help to avoid any further complications and will allow athletes to continue doing what they love.

By taking the appropriate measures – which are fortunately very simple – the person should be able to continue exercising with no major issues. Ultimately, however, it’ll depend on how serious the allergic reaction is, and on the health team in charge of treating the patient.

How Allergies Affect Your Performance
To determine how allergies affect your performance, you must look at them individually to see what measures and prevention you need. Read more »
Link copied!
Interesting Articles
Health
What Happens To The Kidneys During Exercise?

Being overweight can affect aesthetics, as well as your heart and overall health. Having a higher percentage of fat than…

Achieving personal success is an attractive goal for many. People want to achieve the goals they set for themselves in all aspects of life, including sports, work, education, and relationships.…

It's possible to boost your lung capacity by working out. However, you can't do this overnight. In reality, it takes persistent…