Magnetotherapy: Does It Actually Work?

Magnetotherapy is sometimes used to treat conditions without any scientific evidence to prove its effectiveness. As a result, it often comes under heavy criticism. 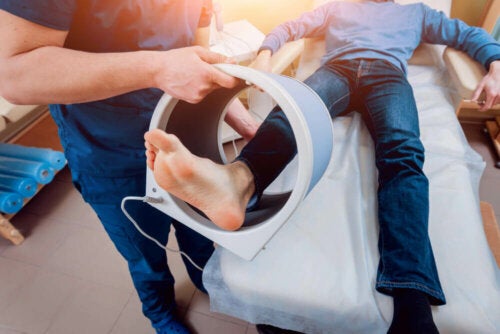 The effectiveness of magnetotherapy is often the source of heated debate. While some studies support claims that it’s an effective form of treatment, there are also many that refute them. Nevertheless, magnetotherapy techniques are often taught in universities and are used in many clinics and hospitals around the world. So, is the criticism surrounding magnetotherapy valid? Can it really be a useful and credible treatment option?

The basic principles of magnetotherapy

Before we go any further, let’s take a look at what magnetotherapy is all about. This technique consists of using magnetic fields to cure many of the injuries and conditions that are often seen in physio and rehab clinics.

The affected area is inserted into a solenoid cylinder, which sends magnetic waves from one side to the other. This forces the waves to pass through that part of the body so that they reach the deepest layers of tissue.

However, because this technique is based on very limited scientific evidence, its use is frequently questioned. Of course, criticism and debate are an important part of science and medicine, helping to ensure the techniques we use are effective.

The problem is that conducting a sufficient number of studies into the effectiveness of this technique is very difficult, as there are a number of parameters to consider. For example, researchers would need to look at the effect of both continuous and pulsatile waves, as well as the vast range of intensities that can be used. What’s more, as some claim magnetotherapy is effective on any type of tissue, we would need to study how it affects each one individually.

Furthermore, physiotherapists have used magnetotherapy to treat a wide range of different ailments over the years. This means that researchers would also have to look at each condition separately. Currently, there are certain cases where magnetotherapy has proven to be effective, somewhere it seemed to have no effect at all, and others where further investigation is required.

The fact that certain facilities offer magnetotherapy as a miracle cure for any ailment has garnered heavy criticism. Inflammation, musculoskeletal pain, fractures, chronic pain, poor circulation – you name it!

Currently, there are no scientific studies to support the use of magnetotherapy in the treatment of all these conditions. In fact, some investigations, such as one published in the British Medical Journal back in 2006, directly question its effectiveness in treating any condition. They also underline just how expensive this form of treatment is.

Other reports have confirmed that magnetotherapy is ineffective when it comes to treating pain. These include a study published in 2007 by the Canadian Medical Association Journal.

However, there are also studies that support the idea that magnetotherapy can promote bone healing after a fracture. In some articles, such as this one published by La Revista Mexicana de Medicina Física y Rehabilitación (the Mexican Journal of Physical Medicine and Rehabilitation, 2002), researchers demonstrated how the effect of magnetic fields could stimulate bone growth and speed up recovery.

There’s also evidence to suggest that it can be effective in treating cases of osteoarthritis. One 2008 study published in La Revista Médica de Costa Rica y Centroamérica (the Medical Journal of Costa Rica and Central America) confirmed that patients reported improvement with regards to pain levels and the quality of their sleep.

So, how should it be used?

It’s important to recognize that critics of this technique are right to worry about its excessive use. Some companies even sell magnetotherapy equipment so that people can treat themselves at home. Others claim that magnetotherapy can also help to reduce stress. The idea that we might be able to use magnetotherapy to cure almost any ailment means that, in many cases, it likely has nothing more than a placebo effect.

As with any type of therapy, its use should be carefully prescribed by a specialist. What’s more, we need to know exactly how to use it, how long for, and ensure that we’re using the right equipment.

In light of existing scientific literature on the subject, the use of magnetotherapy in the treatment of fractures, or as a complementary therapy for managing arthritis, seems to be well-founded.

However, we shouldn’t use it to treat cases of non-specific lower back pain or fibromyalgia, for example. While it won’t have a negative effect, there are other, much more effective ways of treating these conditions.

We should also mention that the lack of research into this topic doesn’t necessarily mean that magnetotherapy doesn’t work. Clinics could well be seeing positive results in their patients. It’s just that there haven’t been enough studies to prove these results conclusively.

Magnetotherapy: finding scientific evidence should be a priority

As with all therapeutic techniques, it’s best to limit the use of magnetotherapy to specific cases. If, over the next few years, scientists succeed in proving that it can help treat other conditions, great! If proven otherwise, medical professionals will need to find a way to adapt.

Hundreds of studies on the topic of physiotherapy are published every year. Professionals must keep an open mind, and be willing to change their methods to keep up with the latest research.

Ultrasound Therapy and its Uses in Physiotherapy
Ultrasound therapy can be used in a variety of different situations, from treating a sprain to administering drugs. We'll tell you more in this article. Read more »
Link copied!
Interesting Articles
Health
The Importance of Good Mental Health in Athletes

We all know competitive people. But those individuals that make any activity a competition are capable of giving the best…

Health
How Can You Exercise While You're Traveling?

Going on vacation or traveling for business shouldn't be an excuse for forgetting about physical exercise. There are many different…