4 Tips to Control Your Nerves

Athletes usually fear getting nervous before a competition. Knowing how to manage nerves is essential to prevent it from spoiling your performance. 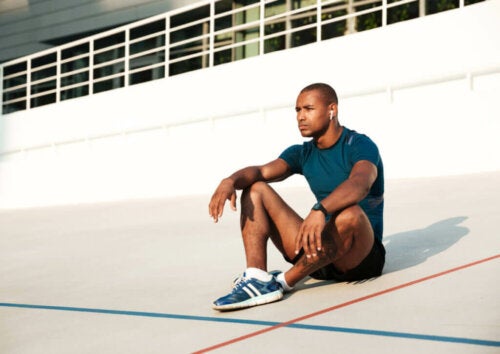 Almost all athletes and coaches are interested in learning new tips to manage their nerves. At the end of the day, excess activation before a competition can impair sports performance if the individual doesn’t know how to control themselves.

Being nervous before a competition isn’t necessarily negative. It’s completely normal for the athlete to feel very active, it’s positive in some way because that means that the sport’s important to them. The problem here is that sometimes that activation makes them feel doubtful and negative, which is detrimental to their performance.

If you relate to this, let us tell you that there are many ways to control your nerves. For example, meditation, relaxation, distractions, routines, among others. All of these tend to work quite well in athletes. The key lies in knowing the athlete well and teaching them the techniques that best suit them.

Learning to control the body’s level of activation is a fundamental task for any athlete. Therefore, here are some tips to help you control your nerves.

Finding yourself in an unfamiliar situation can make anyone feel uncertain and nervous. Many times it becomes difficult to control these factors but that doesn’t mean it’s impossible. There are a few things you can do about them.

Pre-competition routines are a set of actions performed in an automated way at key moments. Their main objective is to direct the athlete’s attention to what’s relevant before a competition. In addition, since they work similar to a ritual, they can induce a feeling of calm and control.

In other words, carrying out a series of actions in a systematic way before competing gives the athlete a feeling of having the situation and their emotional reactions under control.

Practice the habit of meditation

Meditation is a powerful tool for maintaining psychological well-being. It’s very powerful, so much so that its use extends beyond the field of sport and is applied in schools, companies, and hospitals.

In the case of sports, meditation is useful before a competition because it helps the athlete to focus on themselves. In this way, they ignore anything that could distract them. These distractors can be external, such as the public, the environment, or the behavior of the rivals. However, they can also be internal, such as negative thoughts about oneself, for example.

A team of professionals demonstrated this in an article they carried out at the University of Almería. In it, they affirmed that those athletes who meditated performed their tasks with more precision and were less reactive to interferences, alongside enjoying everything they did.

Control your nerves: learn to monitor your body condition

Nerves before competing are manifested by a series of physical and psychological symptoms that make the person uncomfortable and concerned. Therefore, learning to detect them early is key to controlling them before they become a bigger issue.

Nerves present themselves in many ways. Everyone’s different and individual, which means that each athlete feels nervous in their own way. Still, there are a number of very common symptoms that are worth paying attention to.

Once you realize you’re feeling this way, it’s important to move to the next level and work on achieving a state of calm. Furthermore, it’s not enough to look at what’s going on in your body, it’s also necessary to identify the situations where you’re most likely to feel nervous.

Control your nerves through self-instructions

Words can have a great impact on an athlete’s behavior. Many times they only focus on the words their coaches tell them. However, some don’t realize that the words they tell to themselves can have even a greater impact on their performance.

The things athletes repeat to themselves and that have an impact on the way they perform are called self-instructions. Using positive self-instruction before competing helps eliminate nerves and builds confidence.

An example to understand how positive self-instruction can be applied would be for the person to say short phrases such as, “I’m going to do my best!” Or, “I’m ready to face this competition!” This might seem simple but if the athlete repeats them enough at key moments, they can cause a great change in attitude.

Make these tips your best guide to controlling your nerves

Nerves can appear unexpectedly in many situations and play tricks on you. However, you shouldn’t be afraid. Instead, stay alert and be prepared to face them as quickly as possible.

There are many effective techniques you can apply if you’re looking to control your nerves. Nonetheless, remember you should focus on the ones that best suit you. Each athlete (and person, in general) is unique, what works for one may not work for another.

Remember your individuality. Your physical and mental training must adapt to your personal characteristics.

Mental Tricks for a Good Performance
Negative thoughts are very common but they can affect your performance. We present to you easy mental tricks for you to deal with your negativity better. Read more »
Link copied!
Interesting Articles
WELL-BEING
Sports Safety for Older Adults

No stage of life should stop you from doing physical activity. On the contrary, you should always try to stay active.…

WELL-BEING
Physical Exercise and Its Ability to Reduce Stress

One of the best-known effects of physical exercise is the ability to reduce stress. In fact, it's quite common for…

We're all interested in being and becoming happier. Professionals define happiness as a state of well-being. Now, is happiness difficult…

If you're anxious or stressed, the probability of a bad night's sleep is high. Being able to fall asleep is…

Over the past few months, you've probably heard of the new emotional pathology which is caused by social isolation? People who experience cabin syndrome are afraid to leave their homes…

Fitness
Exercises to Strengthen and Stretch your Glutes