Physical Exercise and Its Ability to Reduce Stress

Physical exercise has the great ability to make an individual feel much better, both on the inside and on the outside. The hormones your body secretes while exercising have the power to reduce stress significantly. Keep reading to learn more! 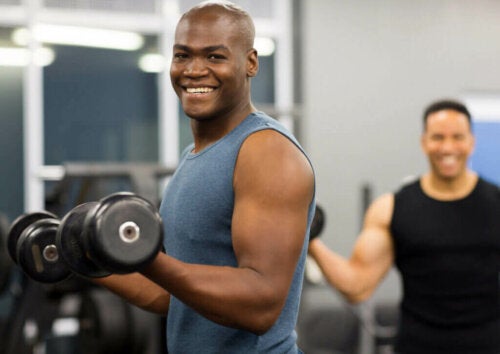 One of the best-known effects of physical exercise is the ability to reduce stress. In fact, it’s quite common for doctors to prescribe half an hour of exercise a day as a way to keep anxiety at bay.

Do you know why this is? Well, both during and after sports practice, the body secretes hormones that induce feelings of tranquility and well-being. Additionally, exercising with other people is a great opportunity to build social relationships and become part of a group.

As you probably know, stress is a very common characteristic in most people in today’s society. Think about it: hectic schedules, cities full of movement, the lack of time to relax… all of those things can make anyone feel stressed out.  An article by the General Council of Psychology of Spain estimates that 96 percent of the Spanish population has experienced stress at some time, whereas 42 percent experience stress on a frequent basis.

These figures show that stress is a worrying issue on which it’s pretty urgent to act as soon as possible. Therefore, in this article, we’ll be discussing the ability that physical exercise has to reduce stress and make an individual feel much better overall.

Find the type of exercise that best suits you

Many people say they’re sedentary just because they can’t seem to find an exercise they enjoy. Well, they’re partially right. After all, without motivation, it’s very difficult for a person to make the effort to move.

If you’re one of these people, let us tell you that there’s an easy solution to this problem. Basically, you must find an activity that matches your personal taste. The range of disciplines and sports is incredibly wide so you’re more than likely to find at least one that calls your attention.

The possibilities are endless: from aerobic exercise to team sports, dancing, or just going for a walk. No type of exercise has more power to reduce stress than another. The key is to find the one you’re comfortable doing.

How much time should you spend exercising each day?

A very common question when starting to exercise is how long it takes to see results. It’s safe to say it isn’t easy to give an answer to this question. Bear in mind that this will depend on many factors, such as your personality or mood before carrying out the activity.

As of yet, no piece of research has determined the exact period of time in which exercise gets to reduce stress. Some studies have found positive effects at 30 minutes, while others at 90 minutes. What they do agree on is that sessions of less than half an hour seem to have little effect.

A group of professionals from the University of Granada carried out a study in this regard. They found that the optimal duration of exercise depends on the type of emotion you want to influence. In other words, the relationship between exercise and negative emotions isn’t as easy as it seems. Exercising for less than half an hour can be effective in alleviating some negative states but not all.

To reduce stress, pay attention to the intensity of the activity

In line with the previous paragraph, the time you dedicate to training isn’t the only important factor here. The intensity of the activity is vital as well. According to this article, for exercise to be able to improve mood, it must be performed at 50 percent of the maximum heart rate when it comes to aerobic exercises. In the case of anaerobic exercises, strength routines should be performed at a moderate and vigorous intensity.

It’s also important to note that increasing intensity without control doesn’t mean greater well-being. Too much intensity can lead to overtraining syndrome and impaired athletic performance.

Practice other healthy habits too

In order to reduce stress, you must pay attention to the other things that may also affect your health. There’s no point in focusing on daily exercise if you don’t take care of your diet or get good sleep.

To be healthy both physically and mentally, it’s essential to acquire healthy habits. Not abusing processed foods, resting at least eight hours a day, and cultivating stable interpersonal relationships are just examples of things you can do that are positive for your well-being.

We’ve all gone through difficult times, we’ve all found ourselves submerged in stress at least once. However, it’s imperative to learn to put a stop to it and control it to prevent its negative consequences from becoming chronic or interfering in other areas of your life.

You must act on what you can control, such as emotional responses or healthy habits. As we said previously, focus on the big picture and start thinking of stress management as a task where every action counts. Don’t make the mistake of neglecting other areas of your life by becoming obsessed with physical exercise.

Fight Stress with Sports: All you Need to Know
Sports are an easy and cheap option to lower your stress levels. Here's everything you need to know about how sports can fight stress! Read more »
Link copied!
Interesting Articles
WELL-BEING
4 Tips to Control Your Nerves

Almost all athletes and coaches are interested in learning new tips to manage their nerves. At the end of the day, excess activation before a competition can impair sports performance…

We're all interested in being and becoming happier. Professionals define happiness as a state of well-being. Now, is happiness difficult…

If you're anxious or stressed, the probability of a bad night's sleep is high. Being able to fall asleep is…

Over the past few months, you've probably heard of the new emotional pathology which is caused by social isolation? People who experience cabin syndrome are afraid to leave their homes…