The three Grand Tours of cycling are the Tour de France, Giro d'Italia and Vuelta a España. Those are the main competitions of this sport. 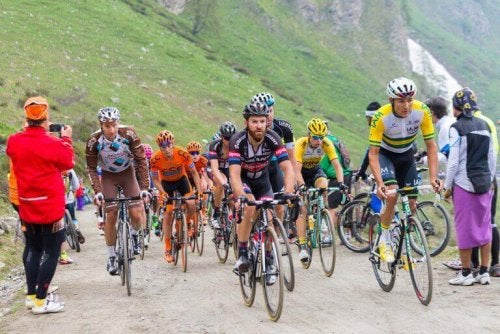 The Grand Tours are the three main road cycling competitions, and they take place in Europe. They include flat and mountain stages, as well as time trials. We’ll tell you all about them in the following paragraphs.

1. Tour de France, a star among the Grand Tours

It’s the oldest Grand Tour since the first edition dates back to 1903; that year’s winner was Frenchman Maurice Garin. It’s also the most famous Grand Tour internationally. It takes place every July and is currently only a men’s event. There was a female version between 1955 and 2009.

On top of that, since 1975, the rider wearing the white jersey is the cyclist under 26 with the best position in the general classification.

The route of the Tour de France varies with each edition. However, at least since 1975, it always ends on the Champs Elysées, a very famous street in Paris.

In the last edition of 2019, -the 106th edition in the competition’s history- the start was on July 6th in Brussels and the route passed through Binche, Épernay, Reims, Nancy, Colmar, Belfort, Saint-Étienne, Toulouse, Nimes, and Valloire, among other cities. It ended in the French capital on July 28, after 21 stages.

The first edition dates back to 1909 in Milan, and it’s the second oldest Grand Tour. The first winner was the Italian Luigi Ganna. This competition consists of several stages, and it takes place over three weeks in May. The women’s Giro d’Italia has also taken place since 1988.

The leader of the classification wears a pink jersey; the best classified in the mountain event wears a blue jersey; the rider with the most points uses a purple jersey, and the leader under 25 wears a white jersey.

The top winners in the history of this race are the Italians Alfredo Binda and Fausto Coppi, and the German Eddy Merckx, with five victories each. Mario Cipollini is an Italian cyclist with the most stage wins: 41 in total. The current Giro d’Italia champion is the Ecuadorian rider Richard Carapaz.

The route of the last Tour of Italy 2019 began on May 11th in the city of Bologna, then continued through San Luca and passed through Vince, San Marino, Ravenna, Modena, Carpi, Como and Treviso (among other cities), to finish on June 2nd in Verona, after 21 stages.

The latest of the Grand Tours had its first edition in 1935, won by the German rider Gustaaf Deloor, who would win the title again the following year. The Vuelta Ciclista a España (its official name), takes place between the end of August and the middle of September throughout the geography of this country.

To differentiate leaders, riders of the Vuelta a España also use different colored jerseys, which have changed over time. Since 2010, they wear red pants and helmets as well. Meanwhile, the leader of the mountain classification wears a white jersey with blue dots, the points classification leader wears a green jersey, and the ‘best young rider’ wears the white jersey.

The top winner of this race is the Spanish rider, Roberto Heras, with four titles. The one who has achieved the most stage wins is the Spanish Delio Rodríguez, with 39. The current champion is the Slovenian rider Primoz Roglic.

The route of the last edition of the Vuelta a España began on August 24th in Torrevieja and passed through the following cities: Benidorm, Alicante, Cullera, Andorra la Vella, Bilbao, Oviedo, Guadalajara, Ávila, Toledo, and Fuenlabrada, among others. It ended in Madrid on September 15th, after 21 stages.

The Best Marathons in the World
The best marathons in the world are the oldest, the most prestigious and the most complicated. Every runner wants to be a part of them! Read more »
Link copied!
Interesting Articles
CYCLING
The Rules of Olympic Track Cycling

Track cycling is an event where competitors cycle around a velodrome. This is an oval track which is 250 meters…

CYCLING
All You Need to Know about the Vuelta a España

It's one of the three grand tours in international cycling as well as being the youngest, only beginning in 1935.…

Those who practice and compete in cycling races aim to win one of the three Grand Tours: the Tour de…

Although born in Kenya, Chris Froome is the son of British parents and is, therefore, a British citizen. In this…