Skating sports are incredibly fun and include both roller and ice skating. Curiously enough, there's more than one sporting variety in this category. 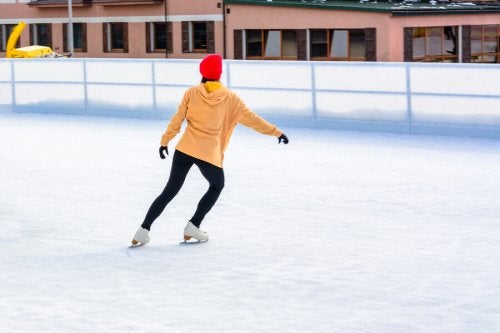 On blades or wheels, on an ice or a roller rink: all varieties of skating sports are exciting. Here are eight of the most popular ones.

In this case, skates have blades so that the skaters leave a mark on the ice as they glide through the ice rink. Some ice skating sports are:

It consists of performing to music, through spins, jumps, lifts and other moves, either individually or in couples. Through a scoring system, the judges decide which participants have been the most technical and athletic.

Ice skating, which is portrayed in the first picture above, takes place on ice rinks of up to 60 meters long, and 30 meters wide.

In this sport, two teams of six players each, compete against each other. There are five players skating through the rink and one goaltender. The objective is to get a rubber disk, or more accurately, the puck, through the rink by hitting it with a long stick and aiming at the opponent team’s net.

Ice hockey was invented in Canada, and the first competition took place in 1875.

As the name suggests, this is a dangerous ice skating sport that consists of jumps, spins, kicks and more extreme moves on an ice rink. This sport uses the same skates as ice skating and hockey.

This is another ice skating sport that boosts adrenaline. It’s basically a race on an enlarged track, which was invented in Holland. The first championships took place in 1889.

In the Olympics, there are 12-speed skating races, half of them are for male athletes and the other half are for female athletes.

Roller skating sports can use skates of one or two lines of wheels (inline or quad skates respectively) depending on where the skating takes place. The main sports in this category are:

It’s a team sport in which two teams of five players each (four field players and one goalie), play against each other in an enclosed rink. The goal is to hit a ball with a stick and score in the opponent’s net.

Roller hockey world champions are held in Spain, Portugal, and Argentina. In this skating sport, players use quad skates.

Also called inline speed skating, speed skating involves the use of inline skates, in which the four wheels are aligned. Athletes can compete in a rink with two straight lines and two curves, in a route or enclosed circuit between 400 and 1000 meters long, or in an open circuit, with a route between two points.

The races can be by lanes, individual time, short track, long track or by distance.

This sport involves speed, strategy, and contact. It originated in the US with the traditional quad skates. The rink is oval-shaped and the skating must be counter-clockwise around the track.

There are two teams of five players each, and the goal is to win as many points as possible by lapping members of the opposing team.

Finally, other skating sports worth mentioning are aggressive inline skating which involves performing tricks on street obstacles and with hard sole boots, and road skating which is similar to inline speed skating.

Exercises with a Skateboard to Pump up your Training
There are many exercises you can modify using a skateboard. Here, we explain four great ways to include this element in your daily routine. Read more »
Interesting Articles