Everything You Need to Know about Archery

Modern archery is very different from its ancient version, which was used for hunting or war. 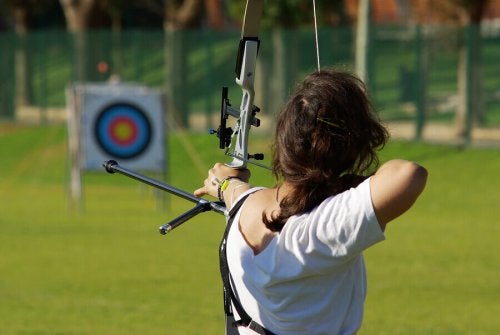 This is one of those sports that require extreme concentration and, mainly, good aim. Archery is an ancient discipline; hundreds of years ago people used it to hunt or for war, but nowadays, it’s mostly both recreative and competitive.

A brief history of archery

It’s not certain when exactly people started to use bows. However, the oldest arrows were found in South Africa and are 64,000 years old, although researchers aren’t sure that they were shot by using bows.

The first evidence of the use of both bow and arrow comes from Europe, more specifically Spain, about 40,000 years ago. Experts believe that it revolutionized the way people hunted in pre-historic times.

After some time, armies used archery as weapons. But once firearms became popular, archery became obsolete and eventually turned into a sport.

Types of bow and arrow

Archers have different options to choose from when it comes to bows and arrows, or feathers, for competitions:

Its height is similar or greater than the archer’s, and its grip is usually wider than other bows. Longbows were popular during Medieval times in England and other cultures for hunting and war.

The Hankyū, which originated in Central Asia, is a short bow, more manageable than the longbow, which helps with precision and performance.

This is the classical bow used in the Olympics. Its tips are doubly curved in an S shape. The shot is smooth and allows for the placement of fixed sights and clickers to adjust the draw length.

Used since ancient times, it’s called composite because it’s made from several types of wood.

The goal of the compound bow is to reduce the force that the archer must exert. In addition, it doesn’t need much tension to achieve high speed.

It’s a variation of the classical design in which the tips are horizontal, like a rifle. Crossbows can be composite or recurved.

When it comes to the arrows, the most common ones have a shaft and a tip. Usually made of wood, aluminum, glass fiber or carbon fiber. Moreover, they have feathers at the end of the shaft opposite to the tip to generate a higher aerodynamic momentum when shooting.

Archery consists of shooting arrows at objects placed at different distances. The World Archery Federation regulates all international competitions, and it acknowledges the following events:

1. Target archery at the Olympics

Which allows only the recurve bow, with doubly curved S-shaped tips. The competition can be individual (men and women divisions) or in teams (of three members each).

In the first one, each archer uses three arrows in five rounds. Then, the two best archers compete against each other in a final round. On the other hand, in the team competition, the team with the highest score after shooting 24 arrows, wins.

There are three world archery championships which take place in alternate years: outdoor (odd years), indoor (even years), and field archery (odd years). The first two exist since 1931, and the third one is the most modern one, taking place in 1969 for the first time.

4 Sports that Demand Intense Concentration
While every sport requires a certain degree of focus, some sports demand more concentration than others. Read about the four most demading sports! Read more »
Link copied!
Interesting Articles
OTHERS
How to Play Frontball: A New Form of Basque Pelota

Interesting Articles
Fitness
Exercises to Strengthen and Stretch your Glutes

Injury and prevention
How to Treat a Meniscus Tear