The Different Types of Golf Clubs

Why does a golfer carry so many golf clubs in their bag during a game? Learn how each club is specific to a certain situation and scenario. 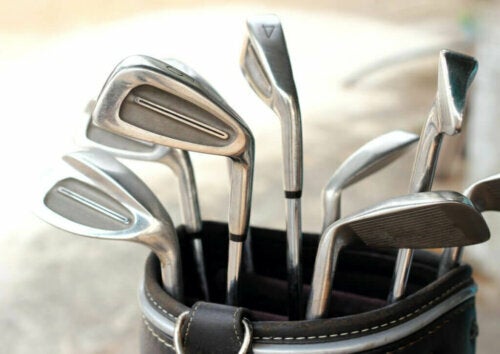 When you see a caddie walking behind a golfer carrying a big bag of golf clubs, you probably wonder if they’re all necessary? The quick answer to this question is yes, a golfer can use all of them during a game. To be able to tell them apart, don’t miss this article!

How are golf clubs used?

Golf clubs are as important as rackets in tennis, for example. Golfers use this instrument to hit the ball from the tee to the corresponding hole.

Because each fairway has a different length (a greater or less distance from tee to hole) and its characteristics may vary, golfers can use different clubs. For example, it isn’t the same to hit a golf ball from a grassy field than from a sandy area.

Golf clubs are marked on the lower part of the face so that golfers can tell them apart. In official matches, for example, the Majors, the golfer, or their assistant, can carry a maximum of 14 clubs of whichever type they prefer.

The rules of the sport have set specifications for golf clubs, such as minimum and maximum length, lower or higher weight, and, of course, their shape. Golf clubs consist of three parts: the head (it hits the ball), the shaft (the stick that connects the head to the grip, usually made of graphite), and the grip (made of rubber or leather, so the golfer can hold it without problems).

The different types of golf clubs

Golf clubs are divided into five categories: woods, irons, hybrids, wedges, and putters. Each one of them has specific characteristics. In fact, they can be numbered or differentiated from each other.

Golfers choose them to hit the ball harder or reach a greater distance. Despite their name, woods are actually made of metals, such as steel and titanium, along with other alloys. They have a big head and a long shaft and golfers commonly use them to achieve long strokes and to get off tees from each hole.

Golfers use irons for long distances between 229 and 623 feet. These golf clubs have a trapezoidal head hollowed out from behind. The length of the rod can be approximately 35 inches.

These clubs, which can be either blades or cavity blacks, allow golfers to have better control over the golf ball. In fact, they use them for difficult situations, such as tall grass. The approximate distance a 1-iron can propel a golf ball is 629 feet, while a 4-iron 541 feet.

They’re a subset of the iron family of golf clubs and are given specific names based on their curvature (for example, pitching wedge of 44 to 48 degrees or gap wedge of 52 degrees) or where they’re used (such as sand wedge for sand or lob wedge to stop the ball where it falls so it doesn’t keep rolling).

This type of club is used to push the ball into the hole. They can have four designs: blade, mallet, metal-faced, and weight distribution between the heel and toe. The face has an incline of between three and seven degrees. The length of the putters ranges between 31 and 35 inches.

Finally, it’s worth noting that, before, golf clubs didn’t have sequential numbering, since there was a design for each type. Some of them were Play club (driver or 1-wood), Brassie (2-wood), mid-iron (2-iron), mashie (5-iron), cleek (1-iron), or mashie iron (4-iron).

The Four Golf Majors
The four golf majors are the tournaments that all golfers want to win, something similar to the Grand Slams of tennis. Read more »
Link copied!
Interesting Articles
OTHERS
How to Play Frontball: A New Form of Basque Pelota

Interesting Articles
Fitness
Exercises to Strengthen and Stretch your Glutes

Injury and prevention
How to Treat a Meniscus Tear