What is Capoeira: dance, art or sport?

The truth is that there's no exact definition for this 'sport'. It makes us wonder what Capoeira really is, and although many define it as a dance, Capoeira originates from martial arts. 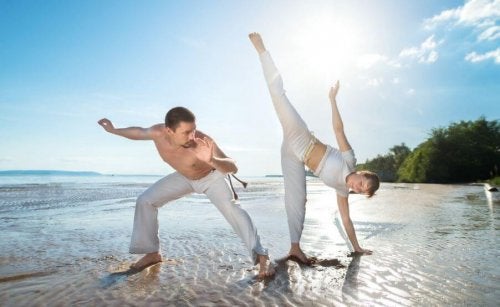 Capoeira became a trend several decades ago and even today many people still practice it. It has been defined as a dance discipline that originates from Brazil, but this definition is still not entirely correct.

According to an editor of a renowned Brazilian magazine:

“Capoeira combines the balance and the flexibility of acrobatics, the grace and strength of dance, the speed and wit of wrestling, and all this, to the rhythm of music.”

Given the controversy of Capoeira being a combination of dance and martial arts, you can imagine that the moves are beyond ordinary. Although it originated in Brazil, it also has an African descent. It’s based on movements that the African people created to celebrate their gods and use in other martial arts.

And although today we find people who practice Capoeira with different music genres, the original style, (the one adopted by Brazilian indigenous people in the 16th century), is Capoeira with berimbau, a traditional African instrument.

Capoeira as a dance

Yes, you may also believe that Capoeira is a dance. Its movements must go with the rhythm of the music and in fact, musicians and Capoeiristas come together in a circle to start ‘dancing’. Two Capoeiristas ‘fight’ as the others sing, clap and play music.

This martial art, sport or whatever you want to call it, is so tightly linked to music that you can consider it dance as well.

Capoeira as a martial art

This is the main definition of Capoeira and the aim behind its creation. Its movements are inspired by other ancient martial arts. The tradition says that it was the slaves who, in the quest of staying in shape to withstand humiliations and oppression, practiced the movements in secret.

The main movements emerged from a courtship dance used by young African men in Angola, so for the people who used to buy slaves, it wasn’t strange to see them make those movements.

Just like that, it spread among slaves as a way of training, which they later used to fight against their “owners” for their freedom. That’s the reason why the most prominent moves are kicks and sweeps at ground level.

Capoeira as a sport

And of course, we can’t deny that Capoeira is a sport. The bodies of those who regularly practice it, are proof of how intensely the muscles work.

Its semi-static moves work not only the external muscles but the internal as well, which translates into more noticeable and long-lasting muscle tone. Since the movements involve the whole body, this martial art allows you to work all areas, without neglecting a single muscle.

In addition, as with any other sport, practicing it has many health benefits. Some of these are:

Any activity that keeps your body moving is beneficial to your health, and Capoeira is no exception. Although at first, it may not seem like a very active sport-art-dance, your body works from the inside.

If you want to try this martial art, look for a professional to help you, since a wrong move could lead to injury. And of course, remember to always have fun and go with the music!

Burn Calories, Get Fit and Have Fun With These 8 Sports
Lots of people exercise to burn calories and lose weight. Knowing which sports burn the most calories can be very helpful in achieving your fitness goals. Read more »
Link copied!
Interesting Articles
OTHERS
How to Play Frontball: A New Form of Basque Pelota

CYCLING
Everything You Need to Know About the Tour de France