Thanks to BodyCombat, you can get to know the basics of martial arts, and train to the beat of the music within a group. Why not learn a little more? 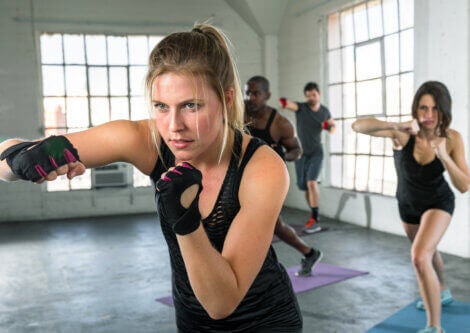 Now you can do martial arts training without needing a kimono or other special clothes. Why not sign up for a BodyCombat class and get into cardio with music, kicks, and punches all mixed in? It’s very entertaining and is ideal for unwinding!

It’s a group training program designed in 1999 by the Les Mills International company. Like a dynamic cardio workout, BodyCombat classes get you moving with martial arts moves, to the beat of suitable music.

Currently, you can join a BodyCombat class with specialized instructors in almost 100 countries around the world. The dances use moves from karate, boxing, taekwondo, tai chi, muay Thai boxing, and Brazilian capoeira.

The classes last around 60 minutes and include ten tracks. The first is for a brief warm-up, the following eight songs make up the bulk of the exercise and the last one is for stretching and warming down at the end of the class.

You can also find a 45 minute version, with six songs and less rest time between the tracks. This option is great for those who prefer to train at a higher intensity for less time, for instance.

Without a doubt, the basis of BodyCombat is the music, since the punching, kicking, elbowing, and so on, are done to the beat of the songs. These songs are chosen by the instructor and are generally mixes of popular rock songs.

Every three months, the class instructors learn a new choreography and teach it at their gyms or training centers.

Although you might think it’s for a more advanced fitness level, BodyCombat is designed for people with a moderate fitness level. That is to say, for people who normally work out. The moves are simple and you won’t need to be super coordinated. Also, you can just follow the music to increase or decrease your workout intensity.

As we mentioned above, BodyCombat classes combine different martial arts. We’ll tell you about them briefly so you know what you’re getting before you start off:

It’s a Japanese martial art, and its movement techniques are known as kata. The basic movements of karate are punches in the air with the objective of working on coordination, flexibility and reaction speed.

It’s not exactly a martial art, but it’s a very complex sport. In boxing, the only hits allowed are with the fists: such as the jab (left hand), cross (straight), hook (horizontal), and the uppercut (rising punch).

It’s a martial art from Korea and includes a lot of kicks. It’s quite exciting and spectacular to watch. The techniques of taekwondo go from kicking to punches, to hits with an open hand, blocks, defense and various positions such as the cat or the walker.

This is an ancient martial art that comes from China. Its objective was originally hand to hand combat. However, today it’s more common for improving flexibility and coordination, as well as helping you meditate on your movements.

Capoeira is an Afro-Brazilian martial art that combines dance, acrobatics and music, and is an excellent form of self expression. The movements include jumps, cartwheels, rolls, and handstands, among others.

Muay Thai is also known as Thai boxing or ‘the art of the eight limbs’. This is because hits are allowed with the hands and feet as well as the knees and elbows.

Now you know a little more about what makes up this popular training system, what else should you know? Here’s a few things to take into account before you turn up for the first time. The workout you’ll get during the session will be quite intense, which means that your arms, shoulders, core and legs will get a thorough workout right from the first minute.

There will be a lot of explosive, dynamic moves, several jumps and a lot of kicks. It might seem a little difficult at the start, but with practice you’ll become stronger and stronger.

During the first few classes, don’t worry too much about learning all of the moves; you’ll gradually learn them by heart. It’s also not necessary to take along boxing gloves or bandages, although it might be a good idea if you have a previous injury.

What is Capoeira: dance, art or sport?
Capoeira became a trend several years ago and today many people practice it. It has been defined as a Brazilian dance, but is it really? Read more »
Link copied!
Interesting Articles
Running
The Best Beaches for Running in Spain

Many people have trouble finding the necessary motivation to exercise regularly. Do you often get bored while exercising? Why not try something different like SH'BAM? It's a new, fun workout…

Let's begin by clearing up the differences between physical activity and physical exercise. This will offer a big plus before…