The Most Demanding Marathons in the World

The most demanding marathons are those that put both physical and mental abilities to the test. Read this interesting article to discover them! 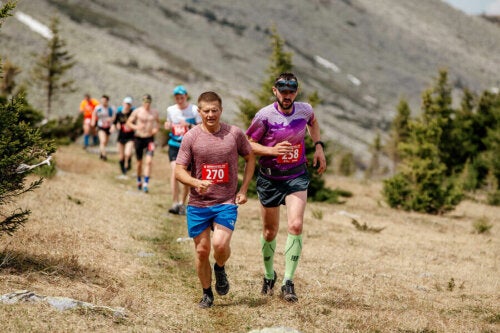 Although marathoners have to constantly face extreme situations, some marathons are only for the most experienced. In the following article, we’ll tell you all about the most demanding marathons in the world. Do you know about them?

What are the most demanding marathons?

Hundreds of miles, several stages, high above sea level, mountain ranges… The most demanding marathons aren’t only physical but also mental challenges. Learn all about them below!

This mountain ultramarathon takes place every August and crosses no less than the Alps through three countries: Switzerland, France, and Italy. This marathon is considered the most prestigious in Europe. It has a distance of 106 miles with a total elevation of 32,940 feet.

Although the winner of the Ultra-Trail du Mont-Blanc completes it in less than 24 hours, on average, the other runners complete it between 30 and 45 hours.

2. El Cruce: one of the most demanding marathons

This is a fairly new marathon that’s been taking place since 2002 at the heart of the Argentine and Chilean Patagonia. Most precisely, it’s held between Puerto Fuy and San Martín de los Andes, in 60 miles divided into three stages of 25, 17, and 18 miles.

The goal of El Cruce is to unite both countries. It’s one of the toughest marathons out there. The marathon is run in teams (women, men, or mixed), who must stay together throughout the course.

Its full name is Hardrock Hundred Mile Endurance Run. It’s a 100-mile marathon held on a loop course on 4WD roads, dirt trails, and cross country. The marathon runs on an average elevation of over 11,000 feet.

The setting for this marathon is none other than Southern Colorado’s San Juan Range in the United States. The marathoners have to cross snow fields and face adverse weather. Only for pros!

This is another of the most demanding marathons in the world. In fact, a third of the participants don’t finish it! Without a doubt, it’s both a physical and psychological challenge. There are many obstacles to overcome, as nature plays against the marathoners.

Tough Guy, held in Wolverhampton, England, is “only” nine miles long. But the athletes must pass through tunnels, suffer electric shocks, and swim in freezing water pools. To participate, the entrants have to sign a contract known as “death warrant”.

5. Rocky Raccoon 100: one of the most demanding marathons

It’s a trail running course that takes place every February in Texas. The participants have to run 100 miles in the Huntsville State Park. At six in the morning, a pistol shot lets the runners know that the race is starting. It ends when the runners complete five laps around this park.

As there are no slopes, it’s quite fast. However, this doesn’t mean that it’s easy. In fact, the wooden bridges and tree roots can play against the marathoners.

It’s one one of the highest races in the world, as it’s 17,600 feet above the sea level. In fact,  it’s so demanding that runners must first pass several medical tests, especially due to the altitude and lack of oxygen.

One of the most demanding marathons on the planet is run around the vicinity of Mount Everest.

The Everest Marathon is held every May in the district of Solukhumbu, Nepal, around the vicinity of the highest mountain range in the world.

This marathon takes place in Norway. The most curious thing about it is that it’s held in the heart of winter, in January, during the Polar night-period. During this period, the sun doesn’t rise above the horizon and there’s 20 hours of darkness and only four hours of sunlight each day.

The Polar Night Half Marathon is one of the most demanding marathons in the world.

Although it’s only 13 miles long, the Polar Night Half Marathon is really tough due to the low temperatures. However, the possibility of seeing the Northern Lights is worth the effort.

As a final note, we want to leave you with a few other demanding marathons: Super Heroes Half Marathon (California), Marathon des Sables (156 miles in the middle of the Sahara Desert), Spartathlon (153 miles between Athens and Sparti, the modern town on the site of ancient Sparta), and The Rut 50K (31 miles in Montana, United States).

Long-distance and marathon runners are all too familiar with runner's diarrhea. While it might be difficult to believe, this is…

When we talk about the runner's knee, we're referring to iliotibial band syndrome. Those who run and have a poor…

These days, running is a really popular way of exercising, but many people don't actually know much about the technical…

The medical community and those who practice this sport continuously praise the health benefits of running. It's an exercise that…