The Path to Becoming a Professional Referee

If you want to become a soccer referee, you'll have to meet a set of requirements, as well as passing the qualifying exams. Here's everything you need to know about becoming a professional referee. 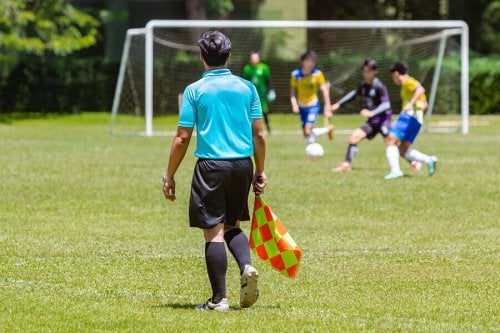 If you love sports and want to make it your profession, you should start studying! Why not become a soccer referee?

Being a true sports nut is another important characteristic to have as you’ll receive plenty of criticism and at times, little appreciation for what you do. Being a referee is definitely no walk in the park and demands physical and psychological strength.

Not everyone can be a referee. National federations establish the requirements for future referees. While these requirements can vary depending on the country in question, they generally encompass the following:

Just as we mentioned above, the test is made up of two parts. Aspirants must pass both parts to pass the exam.

Aspirants first have to pass a theoretical exam. While most people might think the test revolves mainly around sports regulation, it actually encompasses many more topics.

Referees need to know the rules down to every detail in order to carry out their responsibilities correctly. They also have to write up an informative report at the end of each game. These reports have to follow certain formalities that every referee should be familiar with.

The practical exam is different for men and women. Men have less time to finish their exams. All of the physical exercises on the exam are designed to prove the capability of withstanding a 90-minute game.

While the exercises vary from country to country, they generally include speed and endurance activities. In addition, the federations normally change the exercises from time to time.

But you shouldn’t stress over which kind of exercises to expect on the exam as they’re all explained in advance.

Once you make it, what games can you referee?

In a way, referees work their way to the top just as soccer players do. They have to start in lower-category games and progressively move up to professional leagues.

As such, new refs start with adolescents or children’s leagues. After, they may move up to regional leagues. Next, they can finally work in first- or second-division games.

Lastly, the salaries that referees can earn depends on the category of the game they oversee. Not surprisingly, there’s a big difference between the pay that a ref of a regional-category game receives and that of a professional first-division game.

Tips to Prepare for Preseason
To prepare for preseason you must take into account some very important issues, such as when to start, what exercises to perform in the routine, and diet. Read more »
Link copied!
Interesting Articles
Fitness
Benefits of Personal Training

Fitness
Arched Back: 5 Exercises to Improve Your Posture

An arched back is a posture problem known as lordosis. It refers to the pronounced curvature in the lumbar or…

Without a doubt, weak or loose abdominals can be considered arduous and lasting torture. The simple fact of even being aware…