Ultrasound Therapy and its Uses in Physiotherapy

Ultrasound therapy can be used in a variety of different situations, from treating a sprain to administering drugs. We'll tell you more about it in this article. 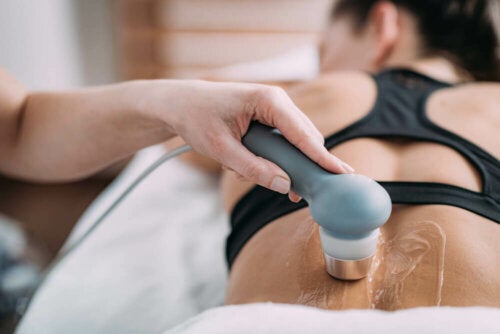 The ultrasound is one of the pieces of equipment most commonly used by physiotherapists. Medical professionals have been employing ultrasound therapy for several decades now, using it to help diagnose and treat a number of different conditions.

While ultrasound is perhaps more commonly used as a diagnostic tool, we’ll be leaving that particular usage aside for today, to focus instead on the different applications of the ultrasound within the field of physiotherapy.

How does an ultrasound work?

This means that we, as patients, won’t notice any effect. However, when we apply an ultrasound probe to a part of the body, it’ll produce waves, which cause the tissues in that area to vibrate very quickly. As well as vibrations, this will also produce heat, along with increased blood flow to the area. These two physical processes make ultrasound therapy so beneficial.

Finally, a study published in the Journal of Orthopaedic Research demonstrated that ultrasonic waves are particularly good at stimulating collagenous tissue. As a result, this kind of therapy usually works best on structures such as tendons, ligaments, fascia, and scar tissue.

Before using ultrasound, a physiotherapist will first apply a layer of gel to the skin. This is because an ultrasound probe needs a conductor in order to penetrate the skin and reach the deeper layers of tissue. The gel is ideal for this.

It’s important to move the probe constantly to avoid “hammering” the same tissues for a long period of time. Tracing small circles allows the vibrations to spread through the tissue without causing damage.

So, in what situations can we use heat and high-frequency vibrations to treat patients? Let’s take a look at some of the conditions ultrasound therapy is most commonly used to treat.

As yet, there’s not enough scientific evidence to confirm whether or not ultrasound therapy is an effective treatment for musculoskeletal injuries. While some recommend ultrasound therapy for problems such as muscle cramps, its effectiveness has not yet been proven. In any case, physiotherapists already have a range of proven treatment options to offer patients.

Iontophoresis treatment consists of using ultrasound to deliver drugs into the patient’s subcutaneous tissue. Instead of applying a conductive gel to the skin, this technique involves applying the drugs directly to the skin in gel form, allowing for better absorption. The results achieved will depend on the drugs used.

Because it uses high-frequency vibrations, there are certain precautions you have to take when using ultrasound in physiotherapy. Firstly, an ultrasound isn’t suitable for use on tumors, or any tissue that might bleed.

Similarly, it’s not recommended if the patient is suffering from an infection, or from conditions such as deep vein thrombosis, arteriosclerosis, or similar circulatory issues. Finally, it’s important to be careful when using it on patients with metal implants or pacemakers. It’s important to move the probe frequently, taking particular care with bony areas.

Ultrasound therapy and its place in physiotherapy

Taking all of this into account, it seems that ultrasound therapy has an important role to play in physiotherapy. While further research is still required, its effect on inflamed tissues and chronic conditions seems promising. However, as always, it’s important to know the risks, as it can be a rather aggressive form of treatment.

Electrotherapy Benefits and Why we use It
This article will explain the benefits of electrotherapy and identify its various uses to alleviate pain from athletic injuries. As well as promote healing. Read more »
Link copied!
Interesting Articles
Injury and prevention
What is The Flag System?

There are many ways to classify the pathologies that patients suffer from when they visit a physiotherapist. The flag system is frequently used when it comes to the classification of…

Interesting Articles
Injury and prevention
What is The Flag System?

There are many ways to classify the pathologies that patients suffer from when they visit a physiotherapist. The flag system is frequently used when it comes to the classification of…