How to Control Your Breathing During Exercise

By controlling your breathing properly, you can perform exercises more effectively, and improve your technique. Ready to find out how? Then read on! 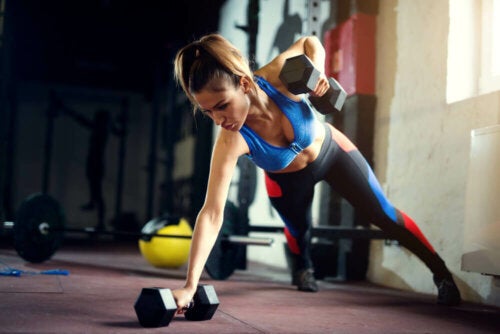 Physical exercise is one of the best ways to oxygenate the various different muscle groups throughout our bodies. This is why knowing how to control your breathing is so important. However, despite being one of the most essential bodily processes, we often fail to control our breathing correctly during exercise.

Every aerobic organism needs oxygen to live. Oxygen, one of the most important elements for life on this planet, is obtained through breathing. Breathing is defined as one of the physiological processes by which oxygen is obtained from the environment through respiration.

Once inside the body, gas exchange is carried out, and the oxygenated air passes into the arteries. Meanwhile, carbon dioxide is collected in the veins and expelled via exhalation. This process is involuntary and is vital for living beings such as humans.

How to control your breathing during exercise

Because it’s something we do automatically 24 hours a day, people often overlook the importance of controlling their breathing during exercise. However, failing to do so can have a huge impact on muscle oxygenation.

Just as breathing happens involuntarily, we often get into bad breathing habits without even realizing it. The most common mistake people make is to hold their breath during periods of great physical exertion, or when performing strength-building exercises.

Control your breathing: make it a part of your work out

When devising a new workout with your trainer, there are a number of key aspects you’ll need to consider, including your technique, the number of sets and repetitions in the routine, and the specific exercises that are included.

However, one of the things we often forget to ask our trainers is how to control our breathing. Because it’s not something we usually have to think about, we often forget it even exists.

While your heartbeat is also involuntary, you’ll generally pay more attention to your heart rate during exercise. In fact, many people take the time to measure their heart rate before, during, and after their workouts.

Due to the process of gas exchange and oxygenation within the body, the heart and lungs are directly connected to one another. That said, we often pay more attention to our hearts than our lungs when it comes to exercise. So, what can we do to change this?

How to incorporate breathing techniques into your workout

Here, the goal is to make sure that your respiratory system and breathing are just as important a part of your workout as your heart rate. To do this, there are a few pieces of advice you might want to keep in mind.

Because breathing is an involuntary process, actively trying to control it can feel a little strange at first. To combat this, we recommend making breathing exercises a key part of your workout.

Before you start your next set of exercises, try taking a few long, deep breaths, inhaling through the nose, and exhaling through the mouth. You can combine this with some subtle arm movements, raising them above your shoulders and allowing your chest to expand as far as possible.

Inhale before every repetition

Exercise sets are made up of a series of repetitions. In order to control your breathing properly, we recommend taking a deep breath before starting each repetition.

For example, when it comes to squats, we typically start in a standing position with legs shoulder-width apart. At this point, you need to take a deep breath in, continuing to inhale as you bend your legs. When you reach the deepest part of the squat, you can then extend your legs, exhaling until you return to your starting position.

As we’ve already mentioned, this is one of the most common mistakes people make while exercising. Holding your breath actually decreases the effectiveness of your workout.

When this happens, the oxygenated blood is unable to flow correctly around the body. As such, experts strongly recommend against holding your breath during exercise.

Is it possible to control your breathing?

In conclusion, it’s important to remember that, regardless of the fact that breathing is an involuntary process, with practice, discipline, and concentration, you should be able to control your breathing. By gradually incorporating these tips into your workout, you’ll be able to improve your technique and increase the flow of blood and oxygen to your muscles.

How breathing affects our concentration
Breathing while concentrating is an efficient and natural exercise to help keep the mind quiet and focus on an idea or object. Learn more here. Read more »
Link copied!
Interesting Articles
Physical therapy
How to Treat a Frozen Shoulder