How to Get Proper Rest After a Concussion

Concussions can happen while practicing some sports. In this article, we'll give you some guidelines on how to get proper rest after suffering a traumatic brain injury. 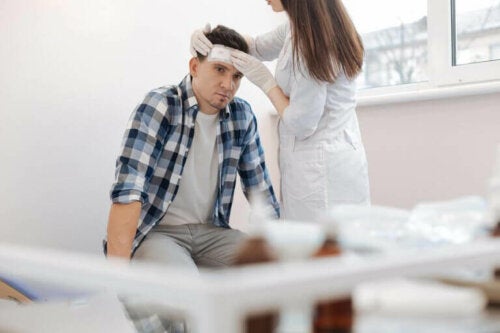 Both during physical activity and in daily life, you’re constantly and inevitably exposed to home accidents that are usually minor. Today, we’re focusing on one of the least likely to happen, but that you should look out for in order to treat it and prevent it: concussion or mild traumatic brain injury.

A concussion, or mild traumatic brain injury, is a mild form of brain trauma. It happens relatively frequently in some sports, and they’re not very common home accidents.

It’s important to recognize the symptoms in order to rule out more severe traumas that could be dangerous for your health.

A concussion occurs when you hit your head. The impact itself can slightly damage brain tissue, although more often, it’s the rebound of the brain against the skull to cause the injury. In this last case, the damage would appear on the opposite side of the brain from where you initially suffered the impact.

As mentioned above, this happens more frequently in sports where you’re more exposed to head trauma. For example, contact sports such as boxing or karate, and team sports such as basketball or rugby.

Symptoms of a concussion

It’s important to recognize concussion symptoms, especially if you think you, or someone close to you, suffered one. In any case, you should suspend all forms of physical activity in order for the brain to rest, since a second hit could trigger the second-impact syndrome, which is potentially fatal.

The main symptoms are:

After spotting these symptoms, it’s important that you see a doctor and evaluate the severeness of the damage.

Sometimes, depending on the intensity of the symptoms, the doctor will conduct a CT scan or an MRI to assess whether there’s an actual lesion in the brain. If so, you’d be facing more serious damage. Keep in mind that sometimes concussions can’t be seen through these tests.

Treatment and rest after a concussion

You should know that concussions, even if mild, need appropriate periods of rest. This includes suspending all activities that could further damage the affected area and cause the second-impact syndrome, which can be extremely dangerous. Let’s see some guidelines on how to rest after a concussion.

Sleeping is very important, but it’s crucial when you’ve suffered a concussion. When you sleep, your brain activity is reduced, as well as your energy expenditure, which makes it easier for the affected area to heal.

Experts also recommend napping for longer periods of time, since increasing sleep hours prevents the brain from being exposed to potentially dangerous stimuli.

It’s important that the brain is as least active as possible in order for it to heal, as we mentioned above. For that to happen, it’s convenient to reduce your screen time, so limit activities such as watching tv or checking out your phone. Furthermore, you should avoid reading during the first days after a concussion.

Just as getting rest is important, eating the right foods is key to helping you heal. If you eat properly, your recovery will be faster and more effective.

It’s important to reduce exposure to new injuries, so you should avoid practicing sports for a few weeks. In fact, you should refrain from doing any type of physical activity for one to two days.

As time passes, you can progressively increase the intensity, as long as you follow your doctor’s guidelines. For some sports such as boxing, athletes should wait at least a couple of months.

Work on your Brain to Improve your Physical Performance
Can you improve your physical performance by training your brain? Whenever a sporting movement occurs, the issuance of that order takes place in the brain. Read more »
Link copied!
Interesting Articles
Injury and prevention
Exercise-Induced Proteinuria

Spinal problems caused by a poor technique in the gym usually happens when someone hasn't received a proper induction. Each…