In this article, we'll tell you about some causes and symptoms of fear that athletes can sometimes face. 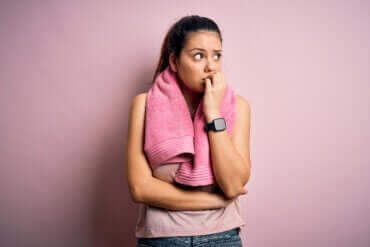 Stage fright in sport is something that every athlete should know about so that they can handle their emotions and feelings before an event. In this article, we’ll tell you about some causes and symptoms, as well as what you can do about it.

Fear is a basic human emotion and is defined as a state of alert to a potential threat or danger. In fact, it’s a natural defense mechanism. But despite being perfectly natural, many people find it difficult to know how to deal with it if they don’t have the right tools.

However, whilst this fear originally evolved to keep us safe, Cotrufo and Ureña (2018) point out that this emotion also appears when taking part in sporting events.

Stage fright in sport is the fear that arises when an athlete joins a team or individual competition for the first time. It happens because of a lack of information or experience about what they’re expected to do. But, it might also be because they don’t know enough about their teammates or other competitors.

If it’s their first time in such a situation, this sort of fear can be a completely normal part of adapting to new circumstances.

When does it become a problem?

Stage fright becomes a ‘problem’ when it stops the athlete from progressing, performing, or concentrating. This is called a ‘panic attack’, and it can lead to anxiety.

Can stage fright cause anxiety?

According to the American Psychological Association (APA), there are several different types of anxiety. One of them is consistent with the description of stage fright or a panic attack before a competition.

The APA says that the following symptoms of a panic attack can develop in the space of about five minutes:

All of these symptoms might also be described as simple pre-competition nerves, which is something that happens to all athletes.

However, some athletes know how to handle this feeling and keep control over it, whilst others don’t. This makes it difficult for them to concentrate and perform.

Many authors claim that this is an involuntary emotional state that occurs before any competition but particularly those at a high level. However, the athlete’s attitude will also have an impact on how they feel, what their attention span is like, and even how good their memory is.

There are several reasons why an athlete might suddenly feel stage fright. The first comes is after they find out that they’re going to compete. If they belong to a team, then they’ll feel a certain extra external pressure to do their best and win. Knowing whether or not they’ll be starting the match or brought on a substitute will also affect the way they feel.

Then again, some athletes compete individually. In this case, stage fright might arise once they start imagining how the tournament is going to be and what the potential results might be. This then stops them from concentrating on the job in hand.

How can stage fright be controlled?

The first thing that every athlete should do is try to control your breathing. This is to try and keep you relaxed so that you can perform as best as you can. Perhaps listening to music might help calm you down too. The key thing is to clear your mind and stay confident.

Additionally, stretching and warm-up exercises are a good idea as they’ll help eliminate any tension in the muscles and you’ll feel ready to compete.

Lastly, Dósil (2007) mentions that the coach’s attitude is also fundamental. They need to know how to handle the situation and provide the necessary security and confidence so that the athlete stands the best chance of achieving their goals.

In conclusion, stage fright or panic attacks before a high-performance sports tournament can cause anxiety and despair before the competition. This can cause the athlete to doubt themselves and worry about their ability to reach their goals.

This can happen because of a lack of preparation and training or because of external pressures. The athlete’s own high expectations may also play a significant role. But despite being a seemingly common situation, don’t hesitate to seek treatment. Help from a psychologist can help you control your emotions and thought processes. With the right psychological tools, you’ll stand a much better chance of performing at your best and reaching your goals.

Strategies to Become a More Resilient Athlete
There are many reasons why it's worth becoming a more resilient athlete. Using the ABCDE model by Seligman can help you face hardships in sports. Read more »
Link copied!
Interesting Articles
SPORTS PSYCHOLOGY
The Amazing Effect of Music in Sports

Health
How Can You Overcome Challenges in Sports?

Coming across challenges is something unavoidable in sports and even in life itself. During training and competitions, there will always…

Health
The Importance of Teamwork in The World of Sport

Teamwork is an essential and inherent part of any team sport. The saying, "United we stand, divided we fall" is…