Jesse Owens, The “Hero” of Berlin

Although Jesse Owens' career was short, he won four gold medals and set several world records. In this article, learn all about Jesse Owens, the “hero” of Berlin. 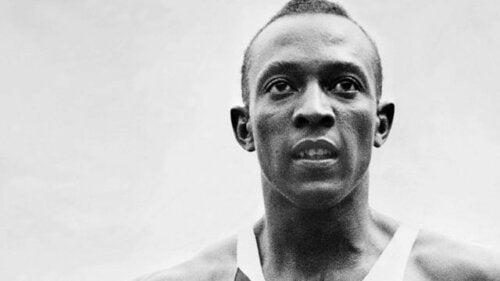 Jesse Owens is known for being the black athlete who won four gold medals at the 1936 Olympics, organized by Nazi Germany. Since then, he’s been considered a “hero” on a sports level, more precisely in track and field. In this article, discover his amazing story.

The beginnings of Jesse Owens

James Owens was born in Alabama, United States, in 1913. He was the youngest of ten siblings. When he was nine years old, his entire family moved to the city of Cleveland, in what became known as the “Great Northward Migration” or the “Black Migration”. During it, African descendants fled from segregation in the south.

Jesse, as he started being called in school, caught his teachers’ attention due to his running and jumping abilities. Professor Charles Riley became a second father to him and taught him everything he knew.

But, things weren’t easy for him as a young black boy in the 1930s. For example, he never received a scholarship to any university, not even for his good sports performance. However, he was able to attend Ohio State University after his father got a job there.

At this university, he received the nickname “The Buckeye Bullet” due to his speed. Although his classmates and teachers helped him, Jesse’s life wasn’t easy. He wasn’t allowed to stay on campus, along with the rest of the African American students. Also, he wasn’t allowed to enter restaurants “for whites”, among other problems.

In order to pay for his studies, in his spare time, he worked any job he could get: as a delivery man, an apprentice in a shoe workshop, a stevedore of wagons, etc.

But this didn’t shake the young man’s confidence. In fact, he started getting noticed in May 1935. In a span of 45 minutes, he set three world records and jumped 26 feet. He maintained this record for 25 years!

Undoubtedly, everyone remembers or knows of the African American who won not one, but four gold medals in Hitler’s Germany. The 1936 Berlin Summer Olympics were organized with Nazi ideology, in which Aryan races were superior.

On the following day, he won again in the 200-meter sprint. Four days later, he won his fourth gold medal in the 4 x 100-meter sprint relay race. Sprinter Carl Lewis managed to win the same amount of medals at the 1984 Los Angeles Summer Olympic Games.

Of course, many versions revolved around why Hitler didn’t salute Jesse Owens when he won the medals. Some indicate that the Fuhrer only wanted to congratulate German athletes. However, most people affirm that he’d never salute an inferior “black”.

Later, Owens claimed that he had slight off-camera contact with the German. Hitler saluted him and the athlete reciprocated, and that’s it.

His life after the Olympics

Jesse Owens’ life didn’t improve after he won those four gold medals. When he returned to his country, he was still subjected to segregation and had to continue his activities separate from whites.

And that wasn’t all. His career ended prematurely when he was only 23 years old. Owens refused to participate in a tour and the authorities withdrew his amateur status, which is why he wasn’t able to continue competing.

However, this didn’t discourage him. He dedicated himself to lecturing across the country, as well as founding the African-American baseball league. To keep competing, he participated in sprints but gave competitors 20-yard leads. But he still always won!

Although you might think that Jesse Owens was born at the wrong time due to all the effort he had to make to compete, today, many still consider him a hero. And not just for being an African American who won gold medals at Hitler’s Olympic Games…

A Visit to the Ancient Site of Olympics: Olympia
In our post today we want to take a trip to Olympia, Greece where the Olympics first began. If you're a fan of the Olympics, start looking for tickets now! Read more »
Link copied!
Interesting Articles
OTHERS
How to Play Frontball: A New Form of Basque Pelota

Interesting Articles
SPORTS PSYCHOLOGY
Can You Control Anger with Sports?

One of the reasons to start exercising is to learn how to control anger. Athletes, coaches, and psychologists know the…

Fitness
Exercises to Strengthen and Stretch your Glutes