Parkour is an extreme sport that more and more people are practicing out on the streets. You can get started on it once you know the basic movements and techniques. 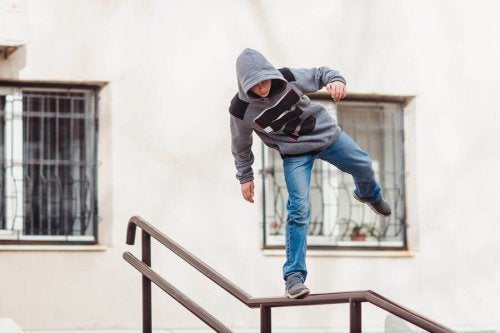 You’ve probably seen parkour in a movie or TV show: people jumping off of buildings and other urban structures. While it may seem surprising, this is a sport and it’s known as parkour. In the next article, we’ll tell you everything you need to know about this rising street discipline.

It’s a street sport that centers around motor skills and working on the natural movements of your body. Parkour originated in France during the 80s, thanks to the initiative of Raymond Belle, a former soldier, and French fireman.

The word parkour derives from ‘parcours du combattant‘ (obstacle course), and it draws inspiration from the military training methods that Georges Hébert used. The goal is to go from point A to point B in the most efficient way possible. This means we have to adapt our body to the requirements of the space we’re in.

Some say that people who practice this sport -traceurs for men and traceuses for women- experiment a great sense of freedom and control over their own bodies and abilities.

You can do parkour individually or with other people. The usual settings are urban spaces such as buildings, parks or fences. The idea is to be in competition with yourself and not with other people, as in the case of martial arts.

Many people wonder if parkour is an extreme or dangerous physical activity. Even though you can regulate the difficulty of the movements, it’s important to keep in mind that you should never put your life at risk when practicing this sport.

One of the particular features of this discipline is that it’s pretty simple. All you need are comfortable clothes and shoes, and knowing the basic techniques. On top of that, it’s also essential to be cautious and have patience when performing the first movements.

We can categorize parkour techniques in three big groups: jumps, landings, and vaults. We’ll briefly go over each one of them in the following paragraphs:

There is precision, descending, arm, running precision and drop jumps. They allow the traceur to overcome obstacles or grab on to a wall or fence.

Basic landings consist of touching the floor with your hands to distribute your body-weight evenly. You can also follow your landing with a roll, a precision jump, an arm jump or a monkey swing. This last movement is performed by holding on to a branch.

They’re very diverse and their goal is to either overcome an obstacle or move from one point to another. Some vault examples are speed vault, cat pass, thief vault, reverse vault, pop vault, lache, plank, balance and kong vault.

How to do parkour

The essence of parkour is: “prepare your body to go from point A to point B as fast as possible and overcome any type of obstacle that may be in your way”.

Parkour is a lot more than just jumping from one side to the other in the middle of the city. While it may seem like it, it’s not a dangerous sport, because every traceur sets their own levels of risk or difficulty.

Beginners usually start from the ground. As the weeks go by, you can start increasing the difficulty and experimenting with different heights. If someone chooses to perform a risky jump, they must be certain that they’re prepared to do so. It’s essential to become familiar with your own abilities and weaknesses! But most importantly, you must overcome your fears.

Improve your style when doing parkour

Parkour is a much more complete training method than what you can imagine. You’ll be working on your flexibility, strength, endurance, and balance. And there’s also the added advantage of being able to practice it out on the street and not having to pay for classes.

When people look at a group of traceurs and traceuses, they may think about them as vandals, bored teens with nothing better to do. However, when we dive into the world of parkour, we realize that it’s a very demanding way of training.

Another different aspect of parkour in comparison to other disciplines is the fact that there’s no competition, at least against other people. In parkour, the only opponent is yourself and your own limits. The rest is just a matter of improving your style and becoming better every day. And also capturing your jumps in videos that take the viewers’ breath away!

If you want to do parkour, we recommend getting help from the people that have been practicing it for a while. They’ll be able to help you with the basic tips. It’s not about copying the movements that you see on YouTube. This could potentially put you at risk and cause pretty serious injuries if you’re not ready to perform them!

The 7 Benefits of Playing Sports for Fun
If there's something we must learn from children, it's that we should be playing sports for fun more often to take a break from our everyday problems. Read more »
Link copied!
Interesting Articles
OTHERS
Rules of Competitive Rhythmic Gymnastics