The World Cup Referees in the Finals

Lots of people remember World Cup referees for issuing a red card or not calling a penalty. Here, we'll review some of the most memorable refs. 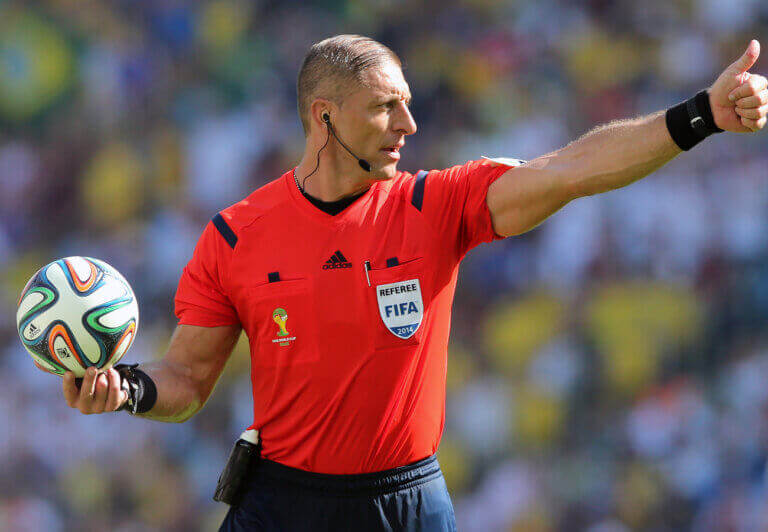 You probably don’t remember the names of the World Cup referees in the finals? But, you might remember an event related to their actions in the match, the most important one every four years. Next, we’ll talk about those who are in charge of enforcing the rules in the most anticipated match in soccer.

Who were the World Cup referees?

There’s a lot of talk in the days leading up to the grand final about who’ll be the World Cup referees, the one in charge of making sure that the rules of the most popular sport in the world are respected. However, once we know who the winner is, we’re likely to forget about the “man in black”- although lately, they’ve been wearing different colors.

Therefore, in this list we’ll tell you some of the World Cup referees, starting from the most recent match.

The final that was played between France and Croatia at the Luznhikí Olympic Stadium in Moscow had as its first referee the Argentine Néstor Pitana, who already managed in Brazil 2014. Also, not only that, but he’d also been chosen to referee in the opening match World Cup, in which the local team defeated Saudi Arabia 5-0 in the same stadium.

In the final, Pitana- on the cover- took a penalty for France, converted by Griezmann. The result of the match was 4-2 in favor of the Gauls.

Along with his fellow countrymen Renato Faverani and Andrea Stefani, Rizzoli directed the final between Argentina and Germany. In the match, the European team prevailed by 1-0 in overtime

However, one of the controversies of the match took place at 56 minutes when the German goalkeeper Manuel Neuer went out to get the ball and attacked the Argentine striker Higuaín, but Rizzoli didn’t penalize it. Then, he didn’t foul Argentine Sergio Agüero, who elbowed Schweinsteiger in the face.

If we’re talking about controversy, the match between the Netherlands and Spain in South Africa 2010 could fill pages. The appointment of Webb was already considered wrong, after having lead another Spanish group.

Even a renowned former Dutch player such as Johan Cruyff said that the referee should have sent two players out of his country. Later, the referee declared that it was the worst two hours of his career, due to the physical and emotional pressure.

Who doesn’t remember the final between Italy and France?  Zidane’s header to Materazzi and the shots from the penalty spot gave Italy the championship. The referee for that match was the Argentine, Horacio Elizondo.

Elizondo became the first referee to direct the opening match and the final in the same cup- then, his countryman Pitana would also do it. The first one was between Germany and Costa Rica.

We could say that Collina is one of the most famous World Cup referees. Currently, he’s a member of the UEFA Referees Committee. Additionally, he was even on the cover of Pro Evolution Soccer 3.

However, when it comes to his performance at the 2002 World Cup, we must say that he had good performances that led him to lead the final between Brazil and Germany. Here, the South Americans would win for the fifth time in their history.

Belqola became known for directing the final between France and Brazil. Also, he was the first referee from Africa to reach this stage. In this match, the Gauls won 3-0 and were champions for the first time in their history.

The final of this World Cup was between Brazil and Italy, a match that ended tied without goals. From penalty kicks, the South Americans took the title.

As for the referee, the Hungarian, Puhl had a good performance. In addition, he won the award for the best of the year three times. However, he wasn’t selected for France 1998 due to a one-year suspension, following a violent gesture in a Champions League match.

Finally, some other World Cup referees were the Mexican Edgardo Codesal in Italy 1990, the Brazilian, Romualdo Arppi in Mexico 1986, the Italian Sergio Gonella in Argentina 1978, and the Englishman, John Taylor in Germany 1974.

The Path to Becoming a Professional Referee
If you love sports so much that you want to make it your profession, you should start studying and prepare yourself to become a soccer referee. Read more »
Link copied!
Interesting Articles
SOCCER
The Best '10s' in Soccer History