Female Muslim athletes are an example of athletes fighting for religious, equality and political rights. 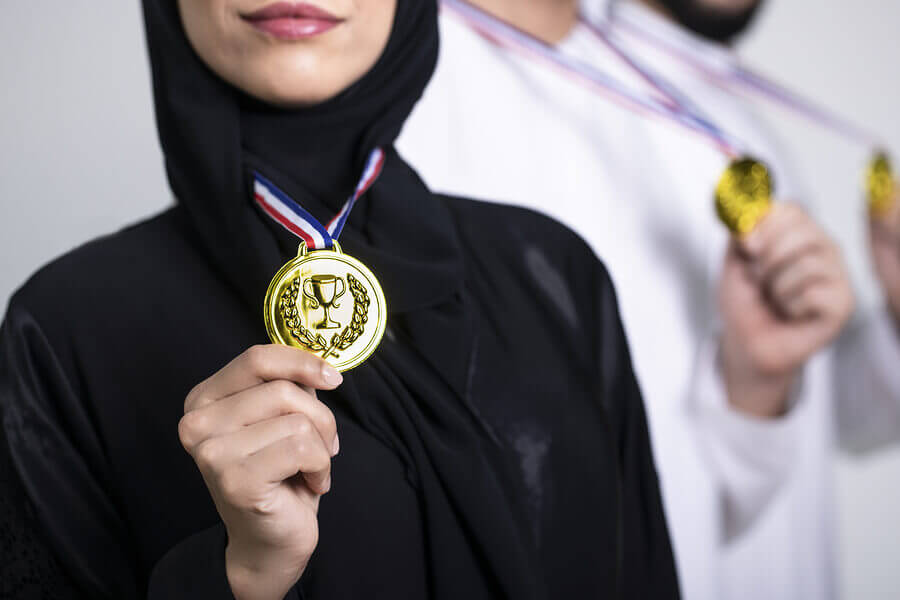 Do you remember the photograph of two beach volleyball players in which one of them wore a typical bikini and the other was completely covered except for her face, hands, and feet? The girl in question is one of the many female Muslim athletes who chose to fulfill their dreams of participating in the Olympic Games while respecting their customs. Read along to find out more.

Some westerners are struck to see women who are completely covered in the streets. However, these religious customs are also observed in renowned international events such as the Olympic Games.

Female Muslim athletes have overcome many obstacles, however, the road ahead will still be challenging. There are many countries that don’t allow athletes to observe religious customs while participating in international events.

There are also international event organizers that don’t permit religious garments. For example, the Iranian women’s soccer team was disqualified by FIFA because the players wore the Islamic veil (also known as the hijab) and this went against FIFA’s rules.

This isn’t an isolated event, other similar scenarios have occurred, including when the International Basketball Federation didn’t allow a Muslim player to enter the court while wearing a veil. Also, when an American weightlifter wasn’t allowed to participate in an international competition for the same reasons.

Although there are still many challenges, the truth is that the presence of female Muslim athletes is increasing. They’re fighting for their right to compete while respecting their religious customs.

Most federations use the excuse that the veil causes health risks to both the athlete and their opponents. This reason is usually mentioned when it comes to contact sports. However, in order to address this Nike launched a special hijab that fits perfectly.

The female volleyball player we previously mentioned isn’t the only Muslim athlete who competes with the hijab. There are also complete teams that use the Muslim veil. The following are a few examples of female Muslim athletes

Born in Egypt in 1996, Doaa is a professional beach volleyball player who became ‘famous’ during the 2016 Rio Olympics when she played with her teammate Nada Meawad during a match against a German duo.

This Moroccan athlete was born in 1952. She’s a pioneer when it comes to female Muslim athletes participating in international competitions. She won the 400-meter hurdles test during the 1984 Olympics in Los Angeles.

Nawal was the first Muslim woman born in Africa to become an Olympic medalist. She did a lot for women from Morocco by organizing different sporting events including five-kilometer races.

She’s currently a member of the International Olympic Committee thanks to her constant fight for the rights of female Muslim athletes.

Ibtihaj Muhammad was the first American female athlete to compete in fencing competitions wearing an Islamic veil. She participated in the 2016 Rio Olympic Games during a turbulent time in the USA following certain measures by President Trump regarding Muslims.

Sarah Attar is another noteworthy female Muslim athlete. Although she was born in California, she competed for Saudi Arabia during the 2012 London Games and the 2016 Rio de Janeiro Olympic Games. She competed in the 800-meters and other marathon events while wearing a veil.

Sarah usually doesn’t wear a veil, rather, a hat to cover her hair. While competing she also wore long sleeves and leggings instead of shorts.

The Important Aspects of Nutrition in Female Football
Female football is a very physically demanding sport, that's why nutrition is very important. Read some tips to improve your performance!  Read more »
Link copied!
Interesting Articles
SOCCER
Which Manchester Stadium Should You Visit?

Interesting Articles
Fitness
Calisthenic Exercises With Your Own Body Weight