Why is Rafael Nadal Invincible on a Sand Court?

Rafael Nadal is considered to be one of the best tennis players in all of tennis history and the absolute best on a sand court. His numbers validate this. 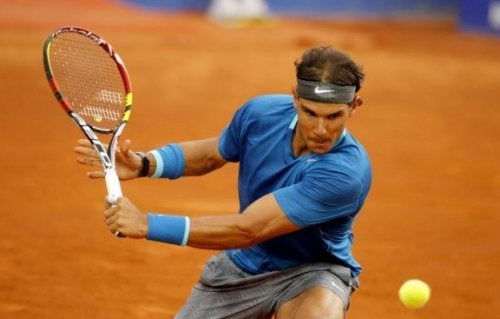 Rafael Nadal Parera (Manacor, Mallorca, Spain, June 3rd, 1986) is a Spanish professional tennis player; he stands out thanks to his success on sand courts. He’s currently in the first spot in the ATP ranking.

He got this award by winning 50 tournaments on a sand court, overtaking the 49 tournaments of mythical tennis player Guillermo Vilas. He became the player with the biggest number of won tournaments in that type of court throughout history.

Nadal can already flaunt having the best streak on a clay court. He went for over two years (from April 8th, 2005 to May 20th, 2007) without losing a match.

Also, his percentage of winning matches on a sand court defies comparisons. At this moment it’s at 91,56 percent after winning 369 out of the 403 played matches. Bjorn Borg is the runner up with 86,3 percent and Ivan Lendl comes in third with 81,4 percent.

The ten Roland Garros he’s won throughout his career prove once again that he’s beyond invincible on a sand court.

Rafael Nadal and his statements

Before winning his last and tenth Roland Garros:

“For me it’s the most important tournament of the year, and I have less and less oportunities as time goes by.”

“It’s a lot of mental tension, and you get an adrenaline slump. I’ve also been through difficult moments. And this is going to be one of the special titles both for the number and the ceremony.”

Statements he made in January 2018, when he was recovering from his latest injury:

“The injury from Australia was a pity, an accident, because things were on the right track and I was playing well. Now I’m just focusing on recovering because the most important thing for me, is to get well for the period between Montecarlo and Roland Garros. Logically, the sand season is set, and my big goal is to be the world’s best player on sand again.”

Today, Nadal is playing the Davis Cup after being on hiatus for two months due to an injury. And, as we’ve mentioned before, he’s managed to win his first match against Philipp Kohlschreiber thanks to his effort, confidence, and mental strength, among other factors.

The Spaniard won with a striking 6-2, 6-2 and 6-3 in a two and a half hours-match and he evened the series between Spain and Germany, proving once again that not even injuries can bring him down and that he is invincible on a sand court.

Even though the Spanish team has seen that he’s on good form and capable of winning, they don’t want to force the player too much since he’s just recovered from an injury. Therefore, the doubles match will be played by Feliciano López and Marc López, since Nadal has an important match against Alexander Zverev on Sunday.

Sports Motivation: Don’t Ever Stop Training!
Laziness and a lack of time are two obstacles to training regularly. In this article, we'll look at some examples of sports motivation to keep you going. Read more »
Link copied!
Interesting Articles
Sports
Is Pay Equality Possible in Professional Soccer?