Apnea Training in Sports: Is It a Beneficial Technique?

Apnea training is more common in swimming than in other sports, but that doesn't mean that there aren't advantages for other sports. We'll tell you what it's all about and if there are benefits to using this technique. 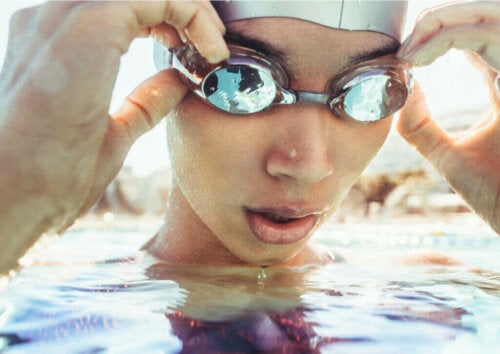 Apnea training in sports isn’t just limited to swimmers. Although these athletes must use this technique relatively frequently to improve their lung capacity and venous return, it’s now also being included in various other sports.

Despite its growth in popularity, there’s still some argument with regards to apnea’s potential uses, safety, and the benefits it could bring. Above all, the risks that apnea training may involve in pursuit of better performance in different sports have been debated.

Let’s see what apnea training is in sports and who uses this technique. We’ll also look at what’s known about its influence over the athlete’s general state of health. Since the technique was first developed in the field of swimming, let’s take a brief look at how apnea training is used in swimming.

What is apnea training in sports?

In medical terms, apnea has to do with interfering with the normal movements of respiration. That is, it basically means the temporary suspension of breathing. It involves the dynamics of how your body takes in oxygen and releases carbon dioxide.

The first athletes to put apnea into practice in a sport were free divers. They used it as a technique to help them improve at their sport. Their goal was to dive deeper and deeper by being able to hold their breath longer. In the free diving environment, the knowledge of apnea training was expanded and its use was made safer.

Further down the track, holding your breath underwater became another basic training exercise for athletes who trained in swimming pools. The theory was that the lack of air improved blood circulation and that it forced the body to be able to adapt more easily to competitive environments.

Do you know how the body reacts to water pressure at certain depths under the surface? Between 10 and 50 meters under the water, for example, there’s high external pressure on the lungs. At 60 meters, the diaphragm reacts and tries to take in oxygen by any means possible, by stimulating breathing movements.

If a diver keeps descending, the problem is that the carbon dioxide in their body isn’t eliminated. Waste products such as lactic acid continue circulating in the bloodstream. When this happens, extreme fatigue and muscle cramps can start to set in. These are some of the dangers of freediving.

How can you train apnea?

Did you know that the majority of athletes don’t practice apnea in the ocean? Actually, the majority practice or train in the swimming pool. Aquatic gyms and indoor swimming pools are common training locations, and certain security measures are also necessary.

Training is a progressive process, with the goal of adapting the mind and body to a greater lack of oxygen. It’s very important not to exceed the body’s limits on the feeling of being oxygen-starved. Otherwise, your reflexes can start to play dirty tricks on you.

One option is to train using active apnea, that is, with movements. The athlete doesn’t just stay below the surface of the water, but also swims for a certain amount of time while holding his breath. Then he may float during the rest time and return underwater to keep practicing.

As we mentioned above, the potential uses of this aren’t restricted to swimming. Cyclists can also train in a similar way, with an exercise bike. The idea is to hold their breath for prolonged periods while they’re pedaling. This forces their body to become more adept at working under extreme conditions.

What advantages does apnea training in sports have?

What are some of the established benefits of apnea training in sports? A study published in Medical Hypotheses mentions that an increase in lung capacity is one of the first and foremost benefits. The lungs increase their oxygen retention as training progresses.

The diaphragm also becomes more efficient, and therefore each lungful of air is worth more to the body. Your diaphragm will be able to help you inhale more air in less time when necessary. In the same way, the entire rib cage will be able to absorb greater muscular impact from the upper limbs. This reinforced rib cage can help to reduce injuries to the elbows, shoulders and neck.

What about the body’s cardiovascular system? Apnea training improves venous return, that is, the return of the blood through the veins to the heart. This translates to better blood flow and circulation.

In aerobic sports, improving venous return is fundamental, since a better blood flow means the blood can get to the working muscles faster and at high intensity.

Of course, we can’t be dogmatic about apnea training in sports. Negative feedback is based principally on the risks involved, since it’s not possible to practice apnea without assistance. A second person must be present at all times throughout the training session. They’ll need to time the dives and be on alert for any potential problems.

Similarly, saying that apnea training is useful for all kinds of sports just isn’t practical. It’s not an appropriate technique for just anyone. And apart from its obvious applications in sports such as swimming and cycling, where apnea training makes a lot of sense, in other sports an evaluation should take place to determine whether an athlete could benefit from this technique or not.

With the above in mind, each individual should decide whether to look into apnea training. Of course, if you decide it’s for you, you should always train with a professional trainer present at all times.

Apnea training has definite advantages, although these aren’t directly relevant in all sports. As always, it’s a good idea to do thorough research using reliable sources to find out what’s right for you.

Tips for Improving Your Swimming Technique
It's difficult for most people to improve their swimming technique or speed. But, this will translate into a much better swim. Read on to learn how! Read more »
Link copied!
Interesting Articles
Running
The Best Beaches for Running in Spain

Now you can do martial arts training without needing a kimono or other special clothes. Why not sign up for…

Many people have trouble finding the necessary motivation to exercise regularly. Do you often get bored while exercising? Why not try something different like SH'BAM? It's a new, fun workout…