The Economic Impact of COVID-19 on The Sporting World

Matches suspended, competitions ground to a halt, soccer leagues suffering millions of dollars in losses. What will the economic impact of COVID-19 have on the sporting world? We'll tell you more in this article. 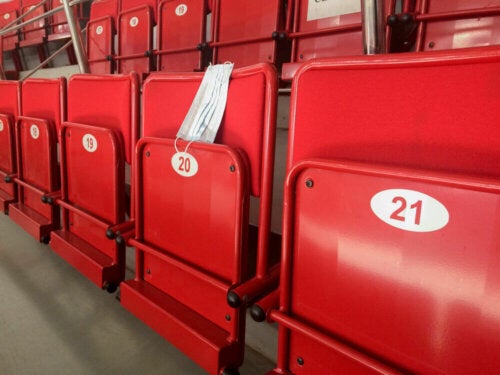 Like many other industries, the economic impact of COVID-19 on the sporting world has been huge. While it’s not yet possible to know with certainty what repercussions this crisis will have long-term, experts have been able to make predictions based on different possible scenarios and recovery dates.

Leagues, tournaments, and contests around the world are currently at a standstill. The sporting world is facing an economic crisis like never before. Needless to say, the situation is a source of growing concern for soccer clubs and other sporting bodies worldwide. But how will all this end?

The pandemic and the world of sports

Tournaments, competitions, and leagues around the world are stuck in a kind of limbo. Coronavirus has had a profound impact on the economy and, in the case of sports, the situation is unprecedented. So far, the consequences have been dire, and the projections for the future of the industry are even more troubling.

There are three possible scenarios: the first is that sporting bodies will be unable to finish ongoing leagues, competitions, and tournaments. Another possible option is that they will go ahead, but behind closed doors.

The last, and least likely outcome, according to current predictions, is that sporting events go ahead with an audience, possibly with slightly smaller crowds than usual. In either case, the economic impact will be huge.

Formula One and soccer are two of the sports that have been worst hit by the current crisis. However, the cancellation of the Tokyo 2020 Olympic Games has also been one of the most significant losses to hit the sporting world.

One of the advantages of soccer is that approximately 75 percent of the season has already been played, making it far more likely that organizers will be able to reschedule the remaining matches for later in the year. What’s more, the soccer industry generates the majority of its revenue through television broadcasts. This gives it a viable way to continue making money over the coming months.

The worst-case scenario, according to experts, would be the cancellation of all scheduled matches in 2020. This would mean a loss of approximately 678 million euros. This figure doesn’t include other important financial aspects, such as sponsorship money, for example.

Basketball, specifically the NBA, could lose around $450 million in box office sales alone if the season is canceled completely, or if the games go ahead behind closed doors. In either case, the economic impact of COVID-19 on the sporting world is completely unprecedented.

The economic impact of COVID-19 on the sporting world

As we mentioned earlier, Formula One is one of the sports which has been worst affected by the coronavirus crisis. Its shares have lost approximately 40 percent of their value. The same is true of the Olympic Games, which have also been postponed.

In fact, it’ll be very difficult for Japan to make a significant amount of profit from the Games, even when they do finally take place, having invested millions.

Sport in the US is no exception, and officials there are deeply concerned. The industry generates more than $129 billion each year. If the current situation continues, the losses may be devastating.

Best case scenario, assuming that some sporting contests might be able to go ahead later in the year, experts estimate that only 53  percent of 2020’s sporting events will be able to take place. This is undoubtedly a terrible blow for the economy of one of the most powerful countries in the world.

It’s important to remember that more than 48,000 sporting events were initially planned for this year. All of these events were due to bring more than $130 billion to the economy. However, due to their sudden cancellation, the sporting industry now stands to lose more than $61 billion.

The whole situation is extremely complex. Despite restrictions being lifted, and the possibility of stadiums and other sporting facilities reopening over the next few months, a high percentage of people admit that they wouldn’t feel as comfortable attending sporting events now as they did before the pandemic began.

The economic impact of COVID-19 on the sporting world is like nothing we’ve ever seen before. At this stage, it’s impossible to accurately predict the full implications it’ll have. Like other areas of the economy, the consequences will be devastating, even in the most optimistic or positive scenarios. What we can say with certainty is that the industry is facing billions of dollars in losses.

Once the situation has returned to normal, experts expect a rebound effect, that will generate a significant boost for the economy in 2021 and 2022. For the moment, however, the priority is to slow the rate of infection and prevent loss of life, before focusing our efforts on recovery strategies.