5 Interesting Facts about the French Open

Is there any better place than springtime in Paris for hosting one of the most important tennis tournaments in the world? Learn some interesting facts about the legendary Paris tournament with us today. 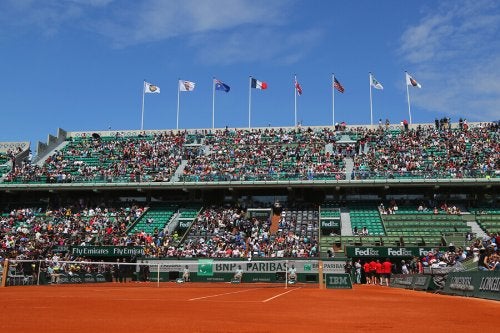 In the ATP (Association of Tennis Professionals) league, there are four major tournaments that tower over the rest. They’re the Grand Slams and they represent a huge source of motivation to spur on tennis professionals each year: the Australian Open, the French Open, Wimbledon and the US Open.

In our post today we want to dig deeper into the second Grand Slam: the French Open, or the Roland-Garros. This tournament takes place in Paris on clay courts. Alongside Wimbledon, it’s one of the most prestigious events in tennis.

The French Open began in 1891 and received its name from a pioneering French aviator. Said aviator fought in World War I and died at the age of 29.

Every year during the last weeks of May and the first weeks of June, the best tennis players face off in France. They play in the Roland-Garros’ centerpiece court, the Philippe Cartier (which has a capacity of 15,000 spectators) for a chance to win one of the most important prizes in the sports world.

Over time, the French Open has seen certain events that tennis players and fans will already remember. Let’s look at the most memorable ones:

The winner of the Men’s French Open wins the Coupe des Mousquetaires or the Musketeers’ Trophy. But why do they call it that? In the 20s and 30s, French players such as Jean Borota, Henri Cochet, Jacques Brugnon, and René Lacoste dominated the Davis Cup.

France won six cups between the years 1927 and 1932. Thinking of those four players, people then started calling the cup “the Musketeers’ Trophy” in reference to Alejandro Dumas’ famous novel. As five of those six cups were won in Roland-Garros, the tournament itself adopted the nickname that referred to France’s star players.

On the other hand, women tennis players can win the Suzanne Leglen Trophy. This honors another famous French player from a different time. The doubles tennis prizes also have names that honor tennis legends: Jacques Brugnon, Simone Mathieu and Marcel Bernard.

2. The evolution of Roland-Garros

In its beginnings, the tournament only extended nation-wide with French players. It was in 1925 when it opened its doors to international players.

As for the prize money, at the beginning of the Open Era in 1968, the winner walked away with a check for 15,000 Francs. Fast forward to 2007, both male and female winners win an equal amount of one million euros. This is for the first time in history. Today in 2019, the prizes surpass more than two million euros.

3. Players winning the most awards and the oldest/youngest players to have won

Spaniard Rafael Nadal is the player who’s won the most times in men’s tennis. Many people see him as the best tennis player in history as he’s won the French Open no less than eleven times.

As for women’s tennis, US Chris Evert has won seven times, making her the women’s tennis player who’s won the most French Open cups. Her last win was in 1986 against Martina Navratilova.

4. Other important facts: the French Open

The Roland-Garros has more than 250 ball boys and girls every year. These young volunteers are between 12 and 16 years old and can’t exceed 1.75 meters in height. In addition, they can’t wear glasses. On a different note, every tournament goes through more than 60,000 tennis balls and more than 1,500 reporters from all around the world cover the event.

Another interesting fact about the French Open is that it starts on a Wednesday. On opening day, more than 8,000 children from schools all across France are invited to meet their tennis idols. Most of the tennis players embrace the tradition happily.

Of course, the list of interesting facts about Roland-Garros could go on and on but we simply don’t have space!

But, one thing remains clear: Roland-Garros has a special atmosphere that every tennis fan will fall in love with no matter where they come from. The warm season brings the action of the best tennis players along with it. So all that’s left to do is to enjoy the action.